You’ve no idea how long it has taken me to write that title, or this sentence for that matter. Turns out typing is considerably more difficult when you’ve recently had hand or wrist surgery. It’s not just the hand I had surgery on that is making mistakes, apparently the affliction travels to the surgery free hand.

Oh, there’s a photo in this post that might be a little too graphic for some of you.

I had carpal tunnel surgery on my left wrist last week. I also had a Covid test, which wasn’t as bad as I thought it would be and apparently negative since they let me have the surgery.

The surgery went well. I walked into the operating room on – with my mask on – got on the table and laid down. The nurse asked me to remove my mask so she could put the other mask on. The one with the oxygen mixed in with some propofol. I remember saying how I preferred that mask to the one I had been wearing (which had an odd odor to it) and the next thing you know I was waking up in another room.

The surgery probably took 20 minutes, and although I was prescribed something for the pain I didn’t bother filling it. I didn’t even pop a couple of Tylenol for the pain, it just wasn’t that bad.

Of course I couldn’t do a damn thing it turns out without my left hand. I can’t open jars – you actually need both hands to open jars, something I hadn’t really considered until I wanted at that jar of herring (gross, but OMG they are delicious!). I have to use two hands to pick up a can of pop if it is on my left side. Cooking and cleaning were pretty much out the first couple of days, but I’ve since made accommodations since we all know how I feel about dishes piling up in the sink.

While in the hospital, before the surgery, the nurse gave me a few sheets of instructions for post – op. She also said she would call my son – who was my responsible adult (gah! when did that happen??!!) and give him the instructions too since I wouldn’t remember any of it – she was right, though it turns out my responsible adult did not remember the instructions either. The paperwork they went me home with only said to remove the dressing after two days and to shower after removing the dressing.

My fingers felt like big, numb, sausages and I was told to move them. I’ve been moving them, they are no longer numb, but they are still extremely stiff and clumsy.

The second day I removed the Ace Bandage and the dressing underneath. Underneath the dressing there was some tape covering the incision. Not sure if I should remove that since the stitches seem to be stuck to the tape and the only way to remove it is by pulling and that would pull the stitches so I left the tape on. 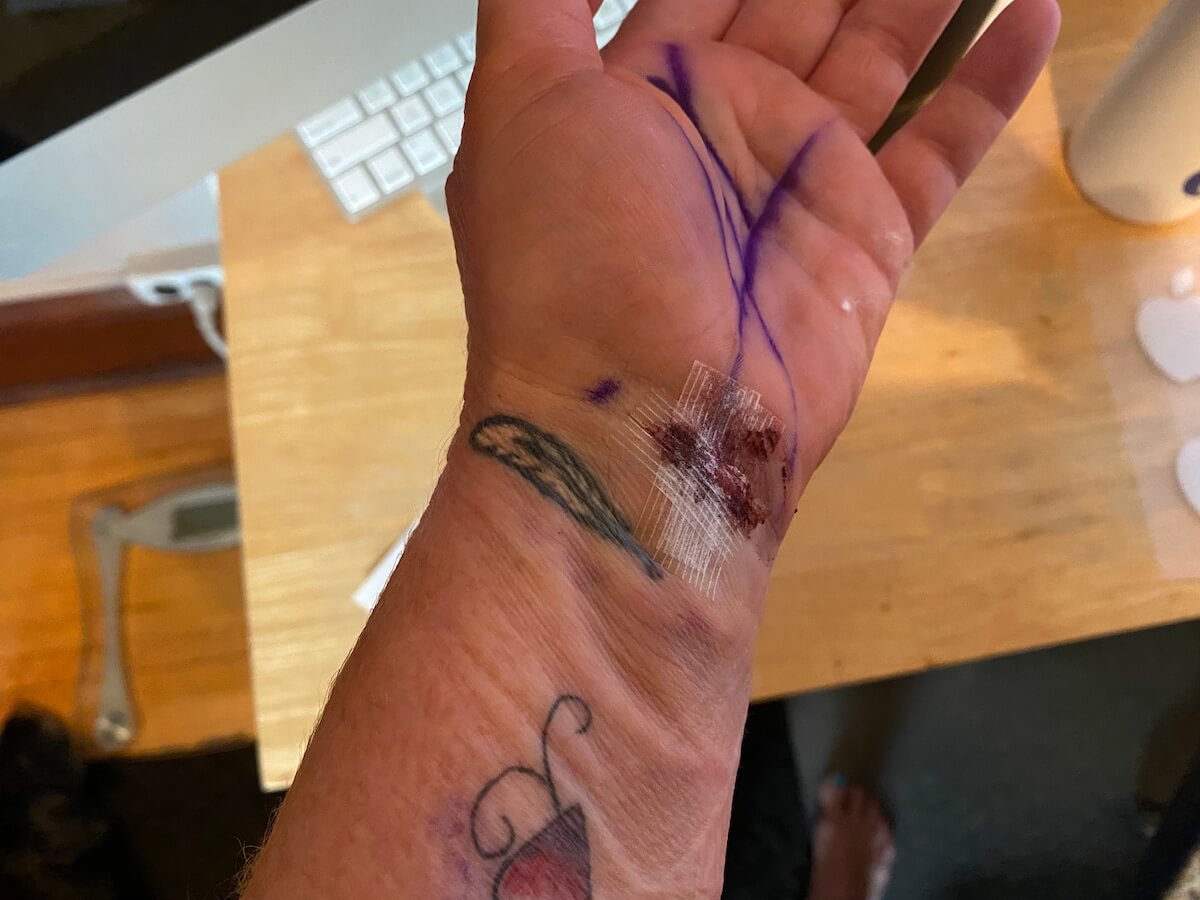 Not sure if they were reading my palm or what but my hand looked interesting. Someone had traced all the lines in my palm with a Sharpie. I know it was a Sharpie because a week later I still have these damn lines on my palm.

Eventually the tape on the incision started to wear off so I cut it off and replaced it with other tape. Not sure I was supposed to do that, but I’ll find out when I see the doctor in another week. So far my wrist doesn’t smell funny so I assume it’s all good.

A week out I can do most of the things like opening jars that have been loosened by someone else and dishes. I vacuum with my right hand so that hasn’t been a problem.

When did I become such a clean freak?

Typing is challenging to say the least. I’m not even sure why, I don’t have to wear the brace, and I only have a bandage over the incision, typing should not be difficult and yet it is, very much so. Not only do I make typos by hitting the wrong key, I also seem to spell with my fingers and not my brain. I’m making more spelling errors, not hitting the wrong keys, just literally spelling words differently for some reason. Thankfully, I took a couple days off so didn’t have to do much typing the first few days (I just typed ‘days’ as ‘fays’, this is the only time I have been thankful for spellcheck in WordPress, usually I fight with it because I have been known to make up my own words, but it’s coming in handy now).

Since I’d taken a few days off I figured I’d catch up on some artsy crafty stuff I’d been wanting to do, but hadn’t had the time. Turns out most of the artsy crafty things require the use of both hands. I ended up taking a lot of walks because I couldn’t sit around watching TV when it was so nice outside. This is probably the only upside to Covid – taking multiple walks is pretty much normal. Since I fixed my AirPods I walk whenever I am not at my desk.

So yeah, the surgery went well.