How To Fix Your AirPods

I’m a Mac. Remember those old commercials? Wow, time does fly. Anyway, I love Mac products, it is one of the hills I am willing to die on so don’t even bother arguing with me that there’s a better option.

For the most part Mac products are work horses and I have consistently gotten more than the average use of them. What I mean by that is I am still rocking a 2011 iMac and MacBook Pro even though I can no longer update the iOS. If you need a reliable computer, and you don’t want to spend any time under the hood, get a Mac – they are the Ronco Showtime Rotisserie Ovens of computers – Set it and forget it! If something does go wrong, usually when there’s an iOS update, a call to Apple Support usually fixes the problem.

Not so with my AirPods. I’ve had these AirPods since 2017, not a bad run for a pair of headphones that I use for at least an hour or two every day. Even at $199 a pair, that’s a pretty good show. I was easily burning through 4 pair of the regular corded headphones a year, and probably losing another pair or two. At $199 a pop, I took extra care not to lose my AirPods.

Anyway, recently my left AirPods wasn’t pairing right away. I’d have to repair the headphones in order to have both of them work. I chalked it up to sometimes using just the right AirPods while driving or when talking on the phone hands free while cooking or doing something that required both hands. It was a hassle to re-pair, but whatever it usually resolved the issue.

Watch the video below to learn how to un-pair and then reset the AirPods (this is the advice that Apple Support will give you and will likely resolve your issue).

The above solution worked for a while and then it didn’t anymore. I called Apple, they had me do all of these things even though I had done them myself several times to no avail.

Apple support and I determined the left AirPod was shot and I should get a replacement.

You can’t just get one AirPod when you walk into an Apple store, you have to order one online and wait for it to arrive. That means using the corded version which OMG sucks so badly after years of being wireless.

I went to BestBuy and purchased another pair off the shelf at a $35 discount from the Apple store, plus I had some rewards so saved another $10 – woohoo!

I’m happy, I have my new AirPods and all is good.

Except the fact that I still have a set with only one working pod is still bugging me. Why would just one quit? It doesn’t make sense, right? So, I figured I’d tinker with it a bit and see if I couldn’t figure out what was going on.

OMG this is turning into one of those recipe posts where they tell you about how their grandma passed down the recipe for cold cereal and how it brought back such wonderful memories of summers at the cape and before you know it you have to slog through a thousand words about grandma and her cold cereal before you actually get to the recipe – hint: it’s cereal and milk. You’re welcome.

I recall when I was a kid and my radio stopped working, I changed the batteries, but it still didn’t work. My dad’s friends who happened to be staying at our house while my parents went to France, told me that sometimes the connections gets gunky and need to be scraped off. He used an emery board I had and gently scraped the connections. Plopped the fresh batteries back in the radio was good as new. 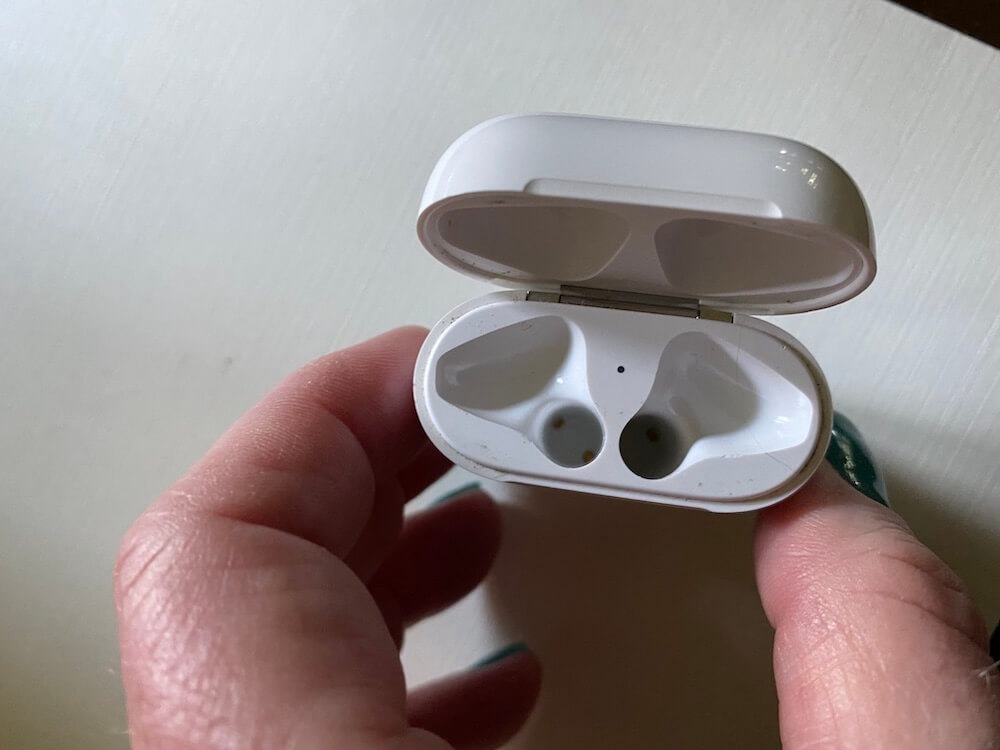 I wish I had tested them here, because then we’d know which was the fix, but I didn’t. Instead I also decided to drop the AirPod a few times to the ground – just in case that worked whatever might have gotten out of whack back into place.

Low and behold, the left AirPod works like brand new!!

TL;DR – gently scrape the connections in the case with a chopstick and give the AirPod a good whack to smack it into submission.