Why I Don’t Unfriend You

I’ve about had it with social media. I spend more time scrolling on by – and not engaging – than ever before. This is not the first time I’ve ranted about unfriending people, and it probably won’t be the last. I find myself only engaging on safe posts now. I will like pictures of your new puppy (I’ll actually use the ♥ for new puppies), I will like collages of the foods you ate last week, and I will contribute to posts about music I like or hate (Rush). I will no longer (rarely) engage in posts about politics or social topics anymore. It’s not worth it. No one actually wants discussion, they only want agreement, and God forbid you don’t agree.

And yet I scroll on by because I like the people with whom I disagree, I just don’t agree with what it is they are putting down.

That used to be okay.

I am a contrarian, I am skeptical. I have seen behind the damn curtain and I can’t unsee it. The world is not perfect and it is not fair – and it will never be those things. Never*.

I’m so sick of people online who believe they know it all. They don’t and yet I don’t challenge them because the pile-on is exhausting. I stopped caring a long time ago if I belonged to the in crowd, but I am still human and being told I am stupid, a monster, or a murdered (I’ve been called all three of those things) for simply believing in something different gets old.

The worst part of all of this is that it’s lazy. I hold many opinions and beliefs. Many are well researched and some are knee jerk reactions. Many of them have not been explored, but the ones that have been I am firm in my belief. Odds are you will not change it, though the ones that are knee jerk or otherwise more automatic I am completely open to having my mind changed.

Of the beliefs I am firm, you can be assured I have done my homework. I did not come to the conclusion carelessly or lazily. I did the homework. I may not have a PhD, but I do have critical thinking skills – something most people lack these days.

And I understand why. As humans, one of our biggest fears is that of being cast out, of being alone. No one wants to be the one to stand out and point out that the Emperor has no clothes unless they know someone else will back them up. Most people are too afraid to back up people with different or less popular opinions so you’re left hanging. It’s just you and belief dangling in the wind completely vulnerable to attack.

And the internet attacks swiftly.

I’ve found that I will engage with men more than women on controversial subjects. I enjoy sparring with men because they don’t hold it against you if you disagree (for the most part). Women will shun you, or shame you or try to destroy you. It’s really sad, though I have felt the desire myself. Men will argue, it may even get heated, but the next day or even next hour they’re making jokes and liking your updates again. There’s not that awkwardness that comes from disagreeing with a woman as a woman.

We’re entering the time of year on the internet when things get heated quickly. Fall is election season and that obviously divides people, but it’s not just that. The same memes go around every year about Halloween, back to school, pumpkin spice vs apples, etc. Every single one of them is meant to divide us.

This has started making the rounds already and it’s only mid-September. 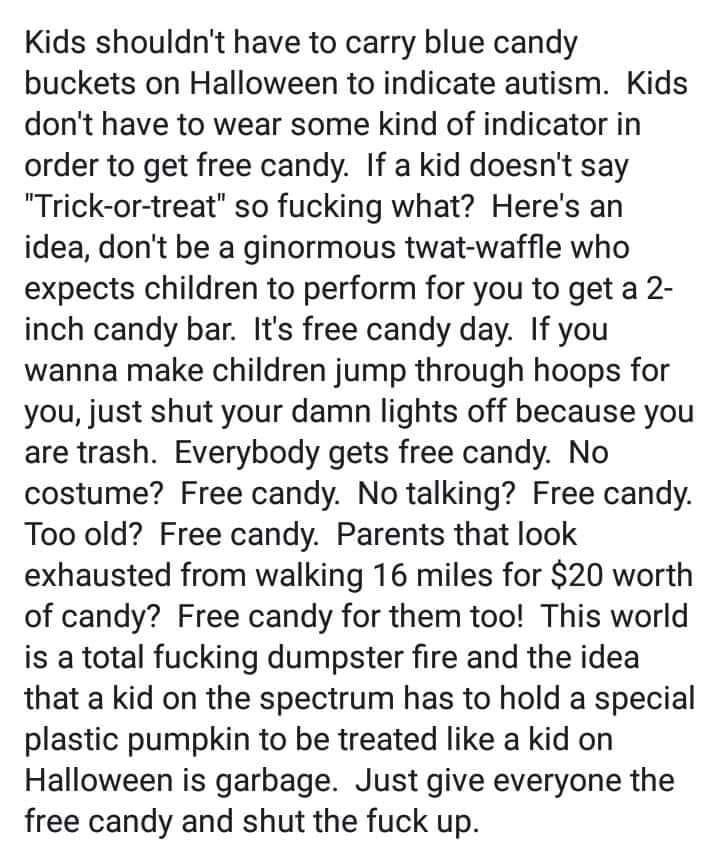 This has been going around for years and yet I don’t know anyone who has refused candy to a child who didn’t say “Trick or Treat”. People don’t refuse candy. They may question if a child is too old for trick or treating on social media, but I don’t know anyone who actually refuses to give candy to anyone that shows up at their door. This meme is so offensive and yet each year many of my friends post it on their timeline because they believe they are taking a stand against… something.

That’s the problem with these memes, the original instigation most likely didn’t even happen, and yet memes like this make it seem as though this sort of abhorrent behavior is wide spread. It is not, and you’re a fool if you think it is.

I won’t unfriend you for posting shit like this, but I will think less of you for buying into it. If you believe this sort of shit to be true it’s time to get off the internet, go outside and meet people in real life.

Also, get off of my lawn.

*which isn’t to say that we shouldn’t try to be our best and lift those up who need lifting.