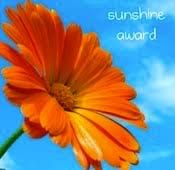 There, I said it.

Hate is a strong word.

I realize I have just lost half my readers with that statement.

I never realized how much I strongly disliked blog awards until last week when I received about a hundred of them.

It was the Sunshine Award from Linda that pushed me over the edge.

The Sunshine Award is awarded to bloggers whose positivity and creativity inspire others in the blogging world.

Linda, you know I love you like the mother I always wished I’d had (oh, the shopping we could do), but if you give me one more fucking award I will, I will… I don’t know what I will do but it will be bad. Mark my words.

There was actually a time I liked blog awards. It was probably a month after I started blogging and I actually had a reader or two. I was given an award, I don’t remember which one because there are so many of them, and I was thrilled. I followed all the rules. I divulged 25 things about me and then dutifully passed it on to bloggers I thought were great. And then I was inundated with emails from bloggers who asked me, not so very politely, to never give them an award again.

I learned an important lesson that day. If you want to make friends in the blogosphere don’t give them awards.

Don’t get me wrong, I like the recognition and I appreciate that someone thought of me. However, I am not convinced receiving an award is a sign that someone likes you, in fact I would hazard a guess that getting a whole bunch of awards means that people don’t like what I have to say and want to potentially stop me from writing my stuff. If I have ten billion awards that I have to write about I can’t possibly find the time to talk about my squirrel problem or the blogs I hate. I’m pretty sure I am winning these awards because some people want me to shut up.

Here’s the problem with blog awards. You get one and then you have to do something with it. First of all you have to go get the award, that part is easy. But then you have to copy and paste the award into a blog post, publicly acknowledge the award (again, not difficult) and often reveal something about yourself. Something like which celebrity you’d shtup if the stars aligned and your significant other was okay with it, or 10 things about you that nobody knows. We’re bloggers for crying out loud, we reveal everything about ourselves, what don’t people already know? Nothing, that’s what.  After the tell all part we are then required to pass the horror on to 7 or 10 unsuspecting blogging friends.

When I stop at a blog and see the award at the beginning of a post I start to pray that they didn’t give it to me.

I suppose I could just leave the site, before anyone notices that I have been there, but that is bad form, and besides, most people know how to read their stats and can tell if I have been to their site.

Once you pass the award on to your dearest friends, and thus severed ties with them, you are required to visit their blog and make it official:

“Hey, just stopped by to let you know there’s something over at my blog for you”

(Oh, what could it be? Cookies? I fell for this the first time. I actually thought there was something over at their blog for me. It wasn’t cookies.)

You aren’t supposed to comment on the actual post, just leave the annoying comment which officially and publicly passes the burden and responsibility of the damn blog award to someone else, anyone else. It’s like a hot potato.

At least that is the right way to win a coveted blog award.

You can do what some bloggers like JD from I Do Things does and just make a page with all the awards she has won. I have to give props to JD for this, she doesn’t bother to copy and paste the actual awards, she just lists them and the giver. Of course she did an awful lot of linking and that takes some time.

Alternatively you can acknowledge the award, state how happy you are to receive it and then never do anything with it. Which is what I usually do. Though I did try to be a little honest over at How Much Longer Friday:

Thank you so much for the award! I didn’t know I was your first. I feel all proud about that. I know a lot of the bloggers you picked like Buggys and Linda, who both rock, but I don’t know the others. I’m excited about going over there and meeting them. Thanks again for the award. This is where I lie to you and tell you I will get right on giving it out but we both know I won’t get around to it because I am really very forgetful and unorganized. I mean to, I really do, I just don’t follow through. You should see the pile of library books that are way overdue that are sitting on the table waiting so patiently to be returned.

Of course what I really wanted to say was:

Thanks for the fucking award, now I have to remember that I got the award, write a cute and wonderfully grateful post about the award which incidentally other bloggers will read and then think I actually like to get these damn awards thus causing me to get more and more of these horribly wicked things. Do you hate me?

So from now on I am going to donate all my blog awards to less fortunate bloggers.  Bloggers like Dooce and The Bloggess who aren’t getting nearly as much recognition and blog love as they deserve.