I hope everyone had a great Thanksgiving.

I had a comedy of errors for mine and even took a picture for you.

My son loves watching the food channels and announced that he wanted to brine the turkey this year. He also wanted to deep fry it but that wasn’t something I was willing to do nor  let him try on his own. We also don’t have a turkey deep fryer or 5 gallons of oil so it was never really considered, at least on my part. He continued to beg.

We did brine the turkey.

I used a recipe my son found from Alton Brown‘s website which involved a pound of salt, 6 quarts of water, five lbs of ice and a bunch of seasonings. The turkey was to go into a five gallon cooler, which we had.

The problem was the recipe called for a 12-14 lb turkey and I had bought a 24 lb turkey because they were  40 cents a pound at Wal*Mart.

It was just the three of us for Thanksgiving but I figured we’d be able to enjoy the leftovers for a while.

Anyway, we prepared the brine and unwrapped the turkey,  which was not entirely thawed out even though I had taken it out of the freezer the week before.

24 lb turkeys are big ass birds that were probably never meant to fit into a 5 gallon Igloo cooler.

Daughter was employed to sit on the turkey to get it in the cooler.

I wish I had taken pictures of this part but I was too busy laughing to think about the camera.

Meanwhile the dog is licking the part of the turkey that had not yet been forced into the cooler.

It briefly occurred to me that we might not be able to get the turkey out but we were committed at this point and pressed on.

I couldn’t fit five pound of ice into the cooler but did manage to fit a couple of trays of ice in there. I figured since the turkey wasn’t completely thawed and I was leaving the cooler outside over night it would be fine. Besides I was going to cook the damn thing so any bacteria that managed to grow would be killed.

We left the turkey outside overnight and Thursday morning I retrieved it to start the cooking process. The bird would take at least 5 hours to cook so I wanted to get it in the oven by 9 so we could eat by 2:30.

I had the oven set and the roasting pan ready to accept the bird when I wedged it out of the cooler.

My roasting pan was not meant for a 24lb bird but I had no other pans that would it would fit into so again I pressed on hoping for the best. 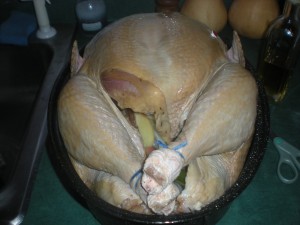 I couldn’t fit the lid on the pan but covered it in tin foil. For reasons I don’t fully understand the bird was finished cooking, indicated by the button that popped up as well as an internal temperature of 165 degrees, after only 2 hours of cooking.

No one was ready to eat at 11 am so I left the bird in the oven on 200 degrees for another three hours.

So we were going to have a dried out bird. I hadn’t cooked the stuffing or mashed potatoes yet. We just weren’t ready for the bird yet.

I had my first glass of wine by noon.

By the time I finished all the other cooking, set the table, showered and dressed it was 2pm. The bird was a little over done since only half of it came out of the pan when I transfered it from the roasting pan to the platter. The drumsticks and wings and whatever part of the bird that is attached to both of those appendages was left in the pan. My son pulled them out and tried his best to arrange the pieces so they looked like a whole bird. He did a pretty good job too.

Surprisingly the bird was not dried out and it tasted wonderful.

It couldn’t have been a nicer Thanksgiving.

I hope everyone had as nice of a holiday as we did.