This is my Star Wars: The Last Jedi review – no spoilers so don’t worry about reading the review. I give nothing away. Yesterday, I was lucky enough to attend a pre-screening of the latest Star Wars installment, even better I was allowed a +1, so I pulled the daughter out of school and brought her with me.

This is my second Star Wars review, I was also invited to Star Wars: The Force Awakens in 2015. Full disclosure – I am probably one of 2 people who have not seen the original Star Wars movies – the other person being my daughter who went with me yesterday. It doesn’t really matter, in my humble opinion. Star Wars is such an iconic movie that it’s impossible to not know what it is about even if one hasn’t seen the movie. I know there are some who would call that hubris and sacrilige, but it is what it is and you don’t need to see any of them to enjoy this one.

Seriously people, stop shaming me for not seeing the damn original! 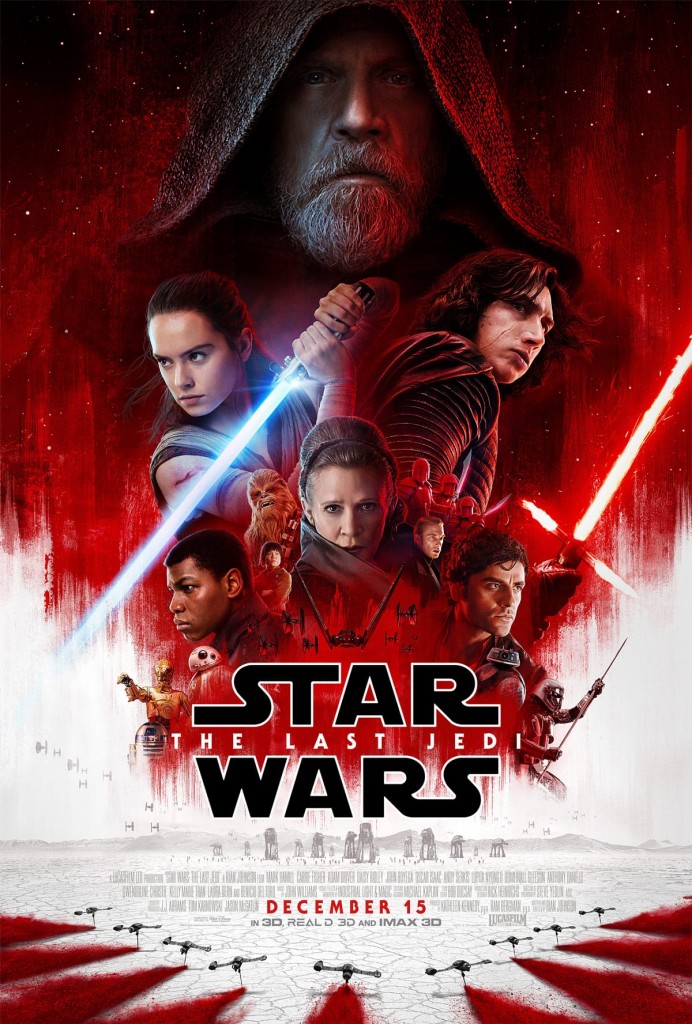 Star Wars: The Last Jedi was directed by Rian Johnson and stars Mark Hamill, Carrie Fisher, Daisy Ridley, John Boyega and Adam Driver…. just to name a few. Carrie Fisher died last December and I wondered how her death was going to be handled in the movie. One has to assume she was finished shooting her scenes because there is no disruption or scenes of just her back (using a double). Carrie Fisher’s Leia features largely in Episode VIII as does Mark Hamill’s Luke. Which is nice as their roles were limited in Episode VII, especially Luke’s. In The Last Jedi both are integral to the plot, not just there for nostalgia’s sake.

While I have not seen Episode IV, or any others, I have seen enough clips here and there over the years to know the general storyline – good vs evil. It’s Hamlet, it’s the same story told thousands of times over and over. The Last Jedi is not different and in many ways very similar to the original Star Wars movie. This is not a bad thing at all. The movie is intense, it is deep and it is incredibly thought provoking. I suspect more than the original Star Wars ever hoped to be.

Women play a big part of this movie. I’m not sure that is in response to the recent awakening of new feminism, the #metoo movement or just plain luck, but it is done well, with humor and without being condescending or preachy.

One of the elements I loved about this movie was how the characters were real. These are not Photoshopped actors who look better than any human could hope to Rey looks healthy, strong for sure but not the least bit worried about her waist size or how appealing she might be to the men around her. Rose, another strong woman who will hopefully be back for the next chapter is also a delight in her average, realness. There is one scene, somewhat humorous scene, where Kylo Ren has his shirt off. It may have been the camera angle or that I was sitting in the second row, but his chest looked way to big for his head. I don’t know if this was just a case of too much working out for the movie or if the actor just has a tiny head, but it was odd.

A big theme of the movie is balance – light and dark, love and hate, strong and weak – The movie itself is balance, even though there is an awful lot going on. The movie is funny, cute, sweet, dark, deep and thought provoking. It is action packed and a great way to spend a dreery afternoon in early winter. I don’t believe there is any swearing and while there is plenty of fighting, it is not gory. Young children shouldn’t have any problem with seeing this movie even though it carries a PG-13 rating.

OMG it is difficult to write a review without giving away any major plot lines or spoilers. There isn’t much I can say that won’t give something away. I will say this, just when you think you’ve figured some things out you’ll discover you might be wrong… or not.

I highly recommend this movie. If you’re looking for a great family movie over the winter break, this is it. It’s got something for everyone to love about it and it’s just so much fun! Can’t wait for the next one!!