If you’re looking for a tasty cauliflower pizza crust recipe that’s not only delicious, but also Keto friendly then you have to give this one a try.

I started making Keto Tortilla Chips out of cauliflower this year, though I have yet to post it on this blog, so this cauliflower Pizza Crust recipe was born of that one. Which is a testament to how easily you can change up the flavors depending on the type of food you’re trying to make.

I love pizza, who doesn’t, but the crust trips me up. These days even a little bit of simple carbs like a regular pizza crust will cause me to have a crash. I’m not sure if this is because I don’t eat sugar much anymore or if it is due to my thyroid disorder, but there it is. So, I needed to find a suitable substitute that was healthy and tasted great.

Who knew cauliflower was so versatile?

Too bad it smells so bad while cooking.

This keto friendly cauliflower pizza crust is delicious, but it is a bit of a production. There’s a fair amount of prep when it comes to cooking with cauliflower. You can’t just whip a cauliflower crust pizza together after a long day at work. Thankfully, you can make the crust ahead of time and freeze them.

A couple of thoughts about this cauliflower pizza crust recipe:

For the sauce I opened a can of tomato sauce and spread a very thin amount of the sauce on the crust. I contemplated using diced tomatoes, but went with the sauce instead. It didn’t make the crust soggy, which was the concern, but I think the diced tomatoes might be better.

When pressing out the ‘dough’, it’s important to get it as thin as possible. If the dough has excess liquid in it you can use a few paper towels to absorb it.

This recipe will yield enough for two pizza crusts. 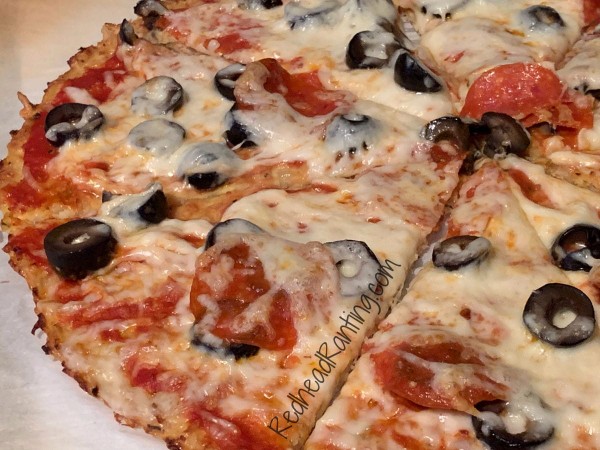