Open All The Stores On Thanksgiving!!

If you’ve been around the internet of late you’ve noticed a growing murmur of people trying to ban shopping on Thanksgiving, they even made this badge that you can post on your blog or share on Twitter or Facebook. 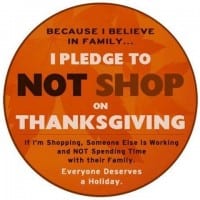 It’s a great idea and who doesn’t want a Norman Rockwell Thanksgiving? How could stores like Best Buy, Sears or Walmart ruin this image of family joy and togetherness? The thing is not everyone has a Rockwellian family. Some people don’t celebrate with family for all kinds of reasons. The rest of us just drink through the holiday, which can make it most enjoyable.

Forever people have had to work on holidays. It’s a drag if you have to but someone has to sell the gas, cigarettes and lottery tickets and someone has to man the emergency rooms across the country. That’s how it’s always been until maybe ten years ago when they started offering deep discounts on cheap TV and crappy laptops.

The birth of Black Friday ushered in all kinds of craziness. People got up at the crack of dawn, or worse, never went to sleep on Thanksgiving, so they could fight crowds of people looking for a deal.

I’ve never been to a store on Black Friday. Usually on Black Friday I’m sipping coffee, watching Love Actually or It’s A Wonderful Life and getting ready to run another load of dishes through the dishwasher leftover from the night before. I may or may not be nibbling on some leftover turkey.

Before Black Friday became a thing there was the day BEFORE Thanksgiving. This was the big day for shopping. Grocery stores, hardware store and stores that sell things like linens, flowers, and anything to make the house look nice got a rush of business from those of us who waited until the last minute. You’d have to fight for the last bag of Pepperidge Farm stuffing and you’d be lucky if you got a can of jellied cranberry sauce.

Some people refuse to eat the Jello-like, can-shaped mass of cranberries because it looks so fake. Not in my house, this is the preferred kind of cranberry sauce because it makes such a satisfying slllluurrrrrpp when it is finally released from the can and falls onto the plate. In recent years the Ocean Spray company has taken it upon themselves to change the design of the can. Now you have to open the can from the bottom because the top is really the bottom and is curved in such a way that it can’t be opened with a can opener. I don’t know who was asleep at the wheel when this engineering feat was implemented but it was a stupid idea. You can’t get the jellied cranberry sauce out of the can without venting the can. With the new design you have to stick a knife in it and it ruins the beautiful ridges created by the can making the sauce almost too mutilated to put on the table. It’s not even suitable for the cry table at this point.

The problem with Thanksgiving before Black Friday is that if you forgot something like butter or whipped cream you couldn’t just run to the grocery store to pick up some more. You had to go to 7-11 and get hosed for a pound of butter. And, if you were low on booze and aunt Helen was coming for dinner you were simply out of luck. You’d have to let her at the good stuff.

So I’m all for opening the stores on Thanksgiving but earlier, like the whole day. In fact, open the stores on Thanksgiving morning, all of the stores, and let people get their shopping jones on. Get it out of their system at the same time all the people planning on hosting a not so Rockwellian Thanksgiving can make one last trip for butter, eggs and some nog for aunt Helen. After they’ve gotten their TV, crappy laptop or the current years Cabbage Patch Kid they can sit down and eat turkey with all their friends and family.

We still live in America, a place where Freedom rings and Liberty sings, right? I know, having the stores open on Thanksgiving means people who work in those stores can’t be with their families. That’s not true, they can reschedule their holiday like all divorced couples have been doing for decades. Life isn’t fair, there are always people who have to work on holidays. If they really didn’t want to work on Thanksgiving they could look for a job that wasn’t in the service industry.  I’m sick of political correctness dictating everything we do in this country.

Why is this even being debated and boycotted? If you want to spend your Thanksgiving shopping then by all means have at it. You’re putting more money into the economy and probably more than you can afford – if that isn’t he American way I don’t know what is. If you don’t want to shop on Thanksgiving spend it with your family or on the couch binge watching episodes of Game of Thrones, that’s a nice family show, right?

Spend your Thanksgiving anyway you want. That’s the great thing about the holiday, it’s about being thankful, it doesn’t matter what you’re thankful for, just as long as you are. And if you aren’t thankful for being lucky enough to live in a country where you can afford to blow off your family so you can spend money you don’t really have on crap you don’t need I don’t what there is to be thankful for.

Stores that are open on Thanksgiving:

Staples (You know, in case you just have to get some paper clips or a three ring punch)

Stores that will be closed on Thanksgiving: