Obama Does Not Want Me To Go To Work 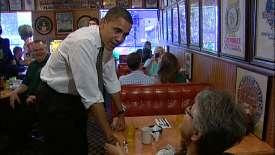 Once again I was late for work because of Senator Obama. He decided to stop in and grab some pancakes and kiss a few babies on his way to the airport after a hugely successful fund raising event in Minneapolis last night.

He stopped in at a local breakfast spot a block from my house and on the main artery that I take to work. The street wasn’t closed but there were so many police vehicles, black SUVs (secret service) and a huge tour bus for the press that it took quite some time to get passed the intersection.

I didn’t have a clue that Obama was in town last night so I didn’t know it was he who was messing up the traffic for me causing me to be late for work. I called my son and told him to walk over and find out what was going on since I couldn’t really get out of my car. By the time I got to work it dawned on me that it was probably him. I called my son who told me that no one was arrested and that some rock star was in town. I asked him if he knew which rock star and he said no. The boy is lacking a respectable amount of curiosity.