Loves Me Some Action Movies 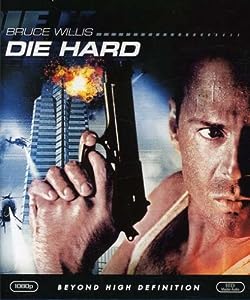 Some of you may not know this about me but I am a huge Die Hard fan. I never thought I was an action movie type person. It was my grandfather who introduced me to all the classics. I grew up watching The Three Stooges, all the Pink Panther movies and any musical ever made. The most action packed movie I ever saw back then was American Graffiti and I had to convince my parents that it was okay for me to skip out on The Sting and watch the movie, by myself, in the theater upstairs.

I didn’t see Die Hard in the theater, I caught it years later on TV, probably basic cable, and filled with commercials. I went out and bought the VHS tape right away.

I dutifully rented each subsequent Die Hard movie even though they all sucked compared to the original.

I didn’t care, Die Hard (and Bruce Willis) introduced me to movies where the good guy always won and the bad guys were really bad. So bad they deserved everything they got.

I like movies where there is action, guns and a whole lot of snappy dialog. The Terminator is another awesome action movie series.

Even the top casino movies can’t hold a candle to the Die Hard or Terminator franchises.

Now, I’ve just learned that there is a new Die Hard movie coming out. I think it’s #5 and called A Good Day To Die Hard, even the title is tough.

I can’t wait and I can’t watch a trailer. I want to but I am afraid it will have all the snappy dialog in it and then the movie will suck in comparison. I also can’t imagine that it could be better than the last one Live Free or Die Hard. That one rocked.

Are there any movies you can’t wait to see but are fearful they won’t live up to expectation?