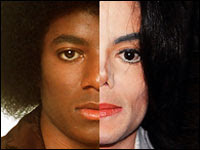 Its Michael Jackson’s 50th birthday today. Does that make you feel old? I remember when he was black. Back then we argued about Michael Jackson and Prince and who was the more popular celebrity, who had more talent and who was a freak. I was partial to Prince all those years ago as were most Minnesotans. We defended his freakishness. I always found it interesting that Michael Jackson named his son Prince. Didn’t he name them both Prince?

Anyway, this is a cautionary tale. Up and coming young celebrities should be made to watch his metamorphosis so they can avoid his pitfalls and also learn when to get psychiatric help instead of plastic surgery.