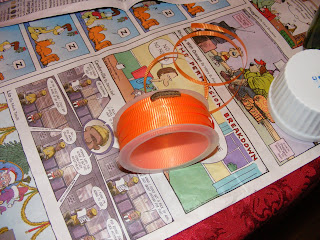 Yesterday it was nearly forty degrees. It was also raining so a good portion of the snow we had was melting. Daughter had made a snowman with the neighbor girl the day before and was anxious to see how it was doing in the rain so I bundled her up and let her go out and play. She not only got to play in the snow but she got to jump in puddles too. That rarely happens in these parts. It has been cold here for weeks and we have had constant snow since the day after Thanksgiving. It was nice to have tempertures in the upper thirties even if it was overcast and raining.

After about 45 minutes outside daughter comes bounding in the house announcing she has found a caterpillar and needs a jar to put it into. Now I’m working upstairs while she is screaming for the jar. I heard her claim of a caterpillar but obviously didn’t believe her. Still, I wanted to finish what I was doing so I told to grab a jar and scoop it up. After a bit of rummaging through the cupboards I heard the door slam. I didn’t give it much thought for a few minutes.

And then I thought to myself what has she mistaken for a caterpillar? Is she picking up bird poop? Surely she knows the difference, right? She had her mittens on so I wasn’t too worried but I made a note to myself to make sure she washed her hands when she came inside.

When she came inside she indeed did have a caterpillar and more interestingly it is alive. She needed a top for her caterpillar’s new home and asked me to poke some holes into some tin foil. We gave it some herbs to eat along with the dried leaves daughter had dug out of the garden.

The best I can come up with as to where this thing came from is it was warm, though I don’t think enough for the ground to thaw, it came out of where ever it had burrowed itself, maybe picked up by a bird and then dropped in our front yard on the side walk. I don’t know much about caterpillars and especially this one.

This is not our first caterpillar pet. We found two plump green ones two plus years ago and captured them and then watched as they built their cocoons and then turned into beautiful blue and black butterflies. We released them at daughter’s daycare and it was the talk of the day.

As I write this I can see Emily. She has been eating and seems to like her new home. Today the temperature is -7 and surely Emily could not have survived this cold even if she could elude any birds looking for a tasty snack. I’m not so sure what we will do with a butterfly if it comes to that however. No matter how it turns out I’m sure there is going to be a life lesson soon.