If you’re looking for comfort food, this Big Mac Hot Dish is just the thing on a cold winter day. Seriously, it’s really tasty and super easy to make.

I grew up on Tang and Pop Tarts, going to McDonald’s was a rare thing in my family and quite a treat when it did happen. The only reason to go to McDonald’s back then was the Big Mac. This was before McRib, Chicken Tenders, McNuggets, etc.

Back then – mid 70s – you had the choice of a hamburger, cheese burger and the brand new two all beef patties special sauce lettuce cheese pickles onions on a sesame seed bun – Big Mac. It was divine.

Now that I’m older, more responsible and more health conscious, when I do go to McDonald’s I order a chicken sandwich and don’t eat the bun. It’s not nearly as much fun so I don’t go often.

Today, I was craving a Big Mac. Mostly I wanted the pickle bite with the special sauce, and cheese. I didn’t want to go to the Golden Arches because I’m really trying to use what I have in my fridge – creatively – so I figured I’d try a Big Mac Hot Dish.

It turned out wonderfully if I do say so myself. Actually I was surprised at how good it is. I didn’t want to make a casserole with pasta. I really wanted to keep it as close to a Big Mac as I could. The problem with that is it would basically be a Big Mac in the blender, and I didn’t want that. So, instead of the pasta I used Tater Tots and OMG it’s awesome.

After I made this I Googled to see if this was a thing. Apparently it is but it uses lettuce and crescent roll dough, and sesame seeds. So, technically this is not really a Big Mac because I left those things out and added the potato, however, I think this is a superior hot dish because it’s like having fries with it – which is the only way to have a Big Mac.

This is the most retro casserole or hot dish you could imagine. It oozes the 70s and it is super!

1 cup Tater Tots (I used the smaller crispy ones)

Putting it all together:

Cook the Tater Tots according the package. I wanted them crisp because I was fearful they might make the dish soggy.

While the tots are cooking brown the ground beef with the chopped onion until cooked thoroughly and drain. Turn the burner down to medium and add the tomatoes and pickles, mix well.

A note about the pickles, I drained them and then pressed them between paper towels to take out as much of the liquid as possible. 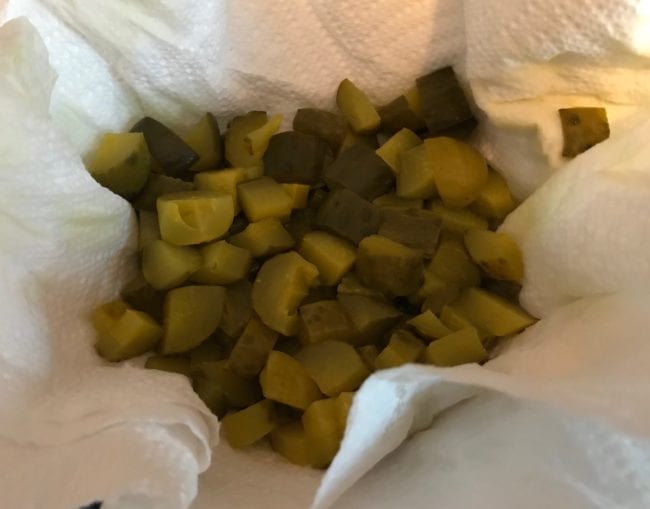 Slowly add the Velveeta and milk and stir while it melts. Add the Thousand Island dressing and mix well. If your mixture is too thick you can add more milk, but you don’t want it runny, it’s okay if it’s a little on the thick side.

Fold in the tots and place mixture in casserole dish and bake covered for 20 minutes at 350°F. Remove the cover for the last 10 minutes or so if you want it to brown up any exposed tots. 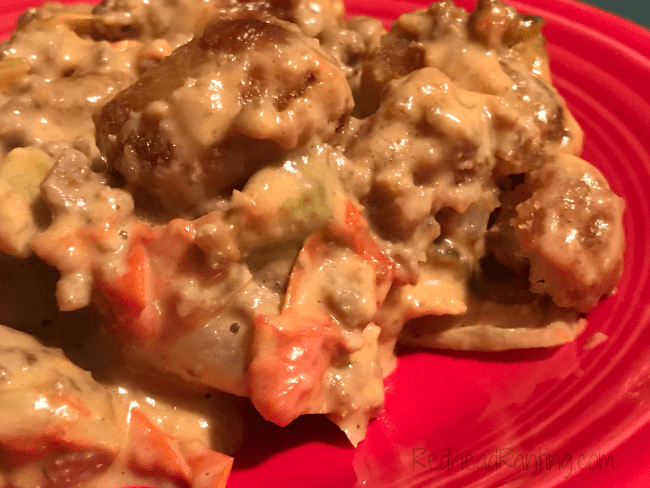 I didn’t think to put a garnish on the dish, but some shredded lettuce sprinkled on top would probably work really nicely and make it more Big Mac ish. You could even put a few sesame seeds on top of the lettuce. I thought about putting some hash browns on top in a very thin layer – mostly for the crunch and color, but that seemed like overkill with the tots so I skipped it. Cheese didn’t seem right either. A little bacon might be good too, it’s just not my thing.

Because I was concerned the tots might get soggy I also made a variation with elbow noodles instead of the tots. I added more cheese to this variation so it was more of a Big Mac & Cheese Hot Dish instead. I’ll post that recipe next.

If you have any ideas for garnish or sides please let me know in the comments.