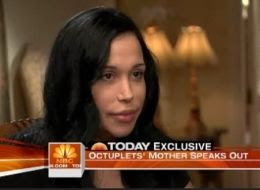 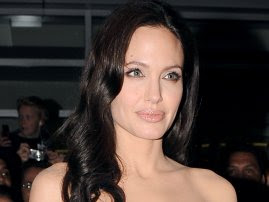 I can’t get this woman who had octuplets out of my mind. Did anyone see here on the Today show today? Did you all notice a resemblance between Nadya Suleman and Angelina Jolie? They both have the same lips and they are both insane. Angelina Jolie might be banging one of the most attractive men in the world (isn’t Brad Pitt one of those actors who doesn’t believe in bathing regularly?) but she is still absolutely nuts.

What do you bet that Angelina announces that she is pregnant again? I bet this is driving her even more mad that she hasn’t had octuplets yet. I don’t remember how many kids she has but seems to me they could start their own small country. In case you are wondering I’m on team Jen.

Back to the crazy lady who thinks having 14 kids is a good thing… There has been a bit of a backlash about this woman. Many people think she is nuts and that she is in it for the money. If she is she is delusional. It doesn’t matter how many kids you have or how much money you have. They will suck you dry no matter what.

She will make money off this, it’s the American way. She will have her own TV show on TLC and people will watch. Jon and Kate Plus 8 is one of the most annoying shows on television and yet people watch it religiously. Besides what else can she do? She can’t send them back. I think a great idea for her show would be to rent out the children to couples who are thinking about having kids. Give them a baby or two for a few weeks and they might reconsider. Give the two year olds to teens for a few weeks and we will put an end to teenage pregnancy. I know there was a show like this recently, I watched it for the first couple of episodes but couldn’t after I threw a can of Diet Coke at the TV when they kept showing the teens in bed together.

I want to know who the father is of all these kids. Apparently he is the father to all her children. I’m betting it is Michael Jackson, just wait.

As for this story there is a lot of crazy to be spread around. There is the woman who thought this was a good idea. The sperm donor who agreed to this mess. And I have to say I hope they did the conception the old fashioned way because Nadya won’t be getting any for a long long time. I hope it was one to remember. The doctors who helped this whole thing along are also nuts. And frankly they ought to lose their license to practice medicine. Shortly after I got divorced I asked my OB to tie my tubes. He suggested that I wait until things had settled down before a make that kind of decision. Smart man, but I haven’t changed my mind at all.

The economy. It would be really nice if all the cable news shows would shut the hell up about our lousy economy. Lie to us. Tell us it’s going well because then maybe the heads of huge corporations will stop trimming their workforce. Maybe the banks will start lending again if they think we can pay back the loans. Stop panicking! Stop scaring the hell out of us because it is working and our economy has sunk to a new low every day and I am tired of it. And if Obama wants to help in this process he needs to hire people that pay their taxes. I can’t believe their is another one that hasn’t paid. Really, it’s unbelievable.

Obama needs to stop blackmailing us too. Telling us that we are going to lose more jobs if we don’t pass the lousy excuse for a “stimulus” isn’t working this time. We’re in too deep and at this point it isn’t going to matter to the majority of us if more people lose their jobs.