Where Does The Walking Dead Go From Here?

After last night’s brutal episode, where does The Walking Dead go from here? SPOILER ALERT!!! If you haven’t watched the series premier of episode 7 and don’t know what happened, then hit the back button now and back away. This post is filled with predictions for where the show will go and also filled with spoilers about what has happened so far.

Without a doubt, last night’s The Walking Dead was the most brutally disturbing episode yet. Of course, it had to be with all the hype that’d been built up over the last 6 months due to the cliffhanger nature of the ending of season 6.

For 6 months I wondered and worried if Glenn was actually going to die, like he did in the comics, or if the whole fake Glenn death under the dumpster somehow rendered him safe.

I had hope, for a little while. I liked Glenn, he was the heart of the show. He was the plucky pizza delivery guy who was always willing to do what was necessary for the group, with little thought of his own safety.

Problem was, he didn’t do much else beyond that. As expendable main characters go, he was the best choice. He was the only choice.

It doesn’t hurt that he got the bat in the comic as well.

I have read the comics, up to episode 100, which is where we are now. I don’t plan on reading it anymore, prefering the show on only one possible timeline. When the book and the show diverge, like they did with the death of Abraham/Denise it’s too heartbreaking for me.

I loved Abraham, he was comic gold and was great at relieving the tension created by the stress of living in the zombie apocalypse. I suspect Negan will now wear that mantle, I’ll just have a difficult time laughing at his jokes. There’s not much relief in that. If one is to laugh along with the bad guy (though, to be fair, Negan does not see himself as the bad guy, and there’s actually some debate on that title. Rick and his group sort of had this coming), one risks identifying with that bad guy a little comfortably.

Abraham and Glenn will certainly be missed, but they had to go. The writers and producers had hyped the show for months, they could not kill off a secondary character such as Eugene or Sasha (my pick). The only other character they could have sacrificed and maintained the hype, would have been Daryl. Thankfully that didn’t happen, though the writers did throw him under the bus when they made him the cause of Glenn’s death.

Where Does The Walking Dead Go From Here?

Obviously, wherever the comic goes, and like I said, I’m not bothering to read it anymore. I do hope the show spends more time with the rebuilding rather than these constant upheavals. The show is so formulaic it’s surprising anyone watches. The characters settle in a seemingly safe place and then a bad guy comes along and destroys it allowing it to get overrun with walkers and the group must find another place. Lather, rinse, repeat.

I’m hopeful that they will remain in Alexandria after they successfully defeated all the walkers that descended when the Wolves attacked.

Negan is the Problem

I want to see the people of Alexandria, and other communities, work to bring civilization back. That is the interesting story to me. I don’t care about the endless bad guys they have to slay. I’m not even sure they’re believable.

How sustainable is it when Negan takes half of everything from these communities that are producing?

It won’t work, it can’t go on for very long because they won’t be able to produce enough resources for those who choose not to participate, as this image from conservative artist, Sabo illustrates. 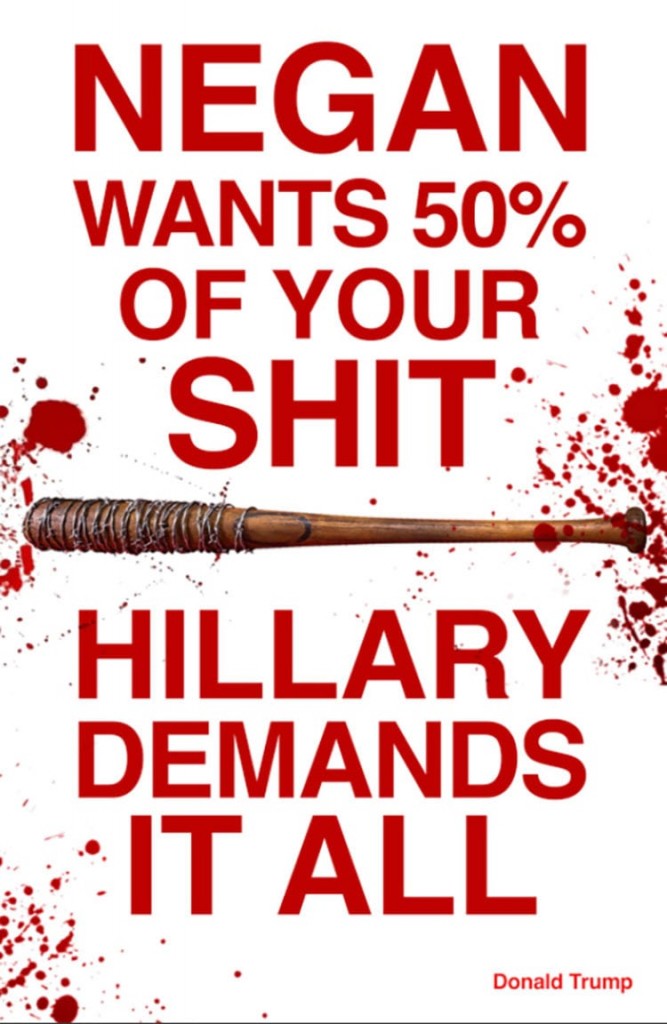 Negan said he wasn’t going to plant a garden when someone else could do it for him.

Those sorts of regimes never last, and of course, we know it doesn’t last in this story either.

I love Jeffrey Dean Morgan, he’s hot as fuck, but Negan is a chore to get through, much like The Governor was. Of course, I am not the target audience for The Walking Dead, and I have no illusions that it will turn into a real character study about what happens when the shit hits the fan. For the most part, the writers shy away from those storylines. The few times they have have been the most interesting episodes, but probably not ratings generators.

I want to keep watching the show, I think about this show and its characters more than any other show I can recall. I have to remind myself that it is just a show. And yet I worry I will lose interest sooner than later.

As the scene unfolded last night, I watched through my hands. I have not been able to get the image of Abraham beaten to a pulp, lying lifeless on the ground out of my head. Same goes for the image of Glenn with one eye popped out (though I stopped watching and just listened after that). I felt the impact of those deaths just as surely as the characters who witnessed it.

Negan has a very fine line to walk

If Negan is too brutal and takes so much, what is the point?

When he was driving Rick around, trying to break him, I kept wondering why Rick kept fighting. I get it, he has Carl and Judith to protect. He’s recently let himself fall in love with Michonne and has that to go on for. Other characters, most of them, don’t have something like that to hold on to. Negan can get Rick to do things because he has leverage. For people like Sasha, Rosita, and eventually Tara when she learns about Denise, they’ll have to find a reason to go on in a world that is so incredibly brutal the title was indeed prophetic.

The Day Will Come When You Won’t Be

The title was taken from dialog from the final episode of the first season, when Dr Edwin Jenner provides a way out of the death trap that is the CDC.

He probably never imagined anyone like Negan and his Saviors.

I’m still traumatized by last night’s episode. I wish both characters were still with us and I am trying desperately to not lose hope in the writing of the show. We shall see.

Where do you think the story will go and where to you think it should go?