The other night as I was working on my post about removal companies in the UK, I was startled to hear my daughter crying, loudly. She had been in bed for about a half hour so the house was quiet and I thought she was asleep.

It was a real cry, not the kind of cry that means I don’t want to go to bed now, but a real ear splitting, something-is-terribly-wrong, cry. My first thought was that the tooth had finally let go and had fallen out.

I was excited and slightly giddy at the thought of the tooth finally releasing itself from my daughter’s mouth so I ran down the stairs and into her room with a smile on my face and asked if she had lost her tooth.

Alas, it was not to be. The tooth is still hanging on for dear life.

“What are you crying about?” I asked.

“I miss my pig blankie,” she said with tears streaming down her face and then through sobs “Can we look for it?”

When my daughter was born I was the designated stay at home parent. As any stay at home parent knows when they are first born they tend to sleep a lot. Not necessarily when you want them to but there are still hours and hours during the day when the kid is asleep. They will tell you to sleep when the baby sleeps but I had a hard time sleeping during the day. I didn’t feel productive and was running out of creative ways to convert leftovers into hot dish. So I did what many moms do and I started crafting.

I had a sewing machine and had learned how to sew so I figured I’d make some clothes for my daughter. After looking at the patterns and realizing that I didn’t have the patience to measure and pin and cut material, I decided to make my daughter a blanket instead. We went to the fabric store and picked out two patterns of flannel material. Sponge Bob and Patrick with a light green background was one and the other was a pattern of pink pigs with purple wings flying around on a background of pink sky. I bought two yards of each fabric and even got batting and trim. I remember thinking that I should get twice the amount of fabric so I could make two of each.

My son had two, white knit, blankies when he was a toddler and became severely attached to them. Of course he did not realize there were two of them. He took The White Blankie, as it was named, everywhere with him and if it was forgotten or misplaced there was hell to pay. He carried The White Blankie around until he was about five years old. The poor thing was really just a tangled mess of dirty off white yarn but it still gave him comfort. One day as we were getting in the car he dropped it in the mud and that was the end of The White Blankie. He knew, even at such a young and innocent age, that it would not make it through another washing. When we arrived home he threw it in the trash and never mentioned it again.

My daughter’s blankets were easy to make but looked like something someone made. They were not perfect by any stretch of the imagination and were quiet stiff actually. I washed them a few times and used them as blankets for her crib. She did not become attached to them until several months later when her dad and I divorced and I had to put her in daycare so I could work.

At first she carried one of them, it didn’t matter which, where ever she went but as she got older the blankies were used only at nap time or night time. In those few years the blankies lost their stiffness and became rather worn. The pig blankie was in considerably worse shape and last year after washing it for the 4892 time it died. I pulled out a mess of fabric from the washing machine. There was no sewing it back together, I had been doing that for about a year already. There was no way to repair it. Since she was safely out of the house at daycare with her Sponge Bob blankie I threw the remains of the pig blankie in the trash. The outside trash in case she threw something away when she got home.

That was over a year ago. Occasionally she has asked if I had seen her pig blankie but she never bothered to look for it herself. I didn’t seem like a big deal especially since she still had the Sponge Bob Blankie.

I never told her I threw it away.

Which means she thinks it is somewhere in our house or at dad’s house. It’s not. I threw the damn thing away and now I feel like shit for not telling her back then. I am a horrible mother. I have lied to my daughter and now I am going to get busted unless I can pin it on her father or somehow suggest that she lost it on her own.

Worse than the deception is that now, since it clearly is not in the house and not at dad’s house, she wants to go to the fabric store to find the same fabric and make another one. They don’t have it I already checked last year.

We are going to the fabric store today after school. I promised. I even wrote it down on a post it note so I wouldn’t forget (at her insistence). I was almost done with the blankies. Sponge Bob is on his last legs now and I am too afraid to wash it. It smells to high heaven like sour milk but I can’t wash it and I certainly can’t throw it away.

I do not want to start another blankie cycle. If anyone has flannel fabric with pink pigs on it would you please email me? 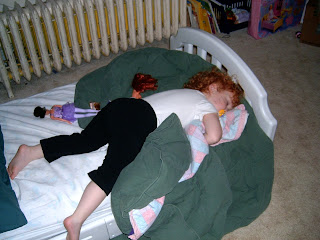 (I don’t even have a picture of the pigs. This is the back side of the pig blankie) 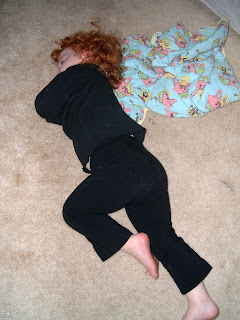