Some of you might remember back in April I wrote about the tooth that would not come out. Eventually it did come out and we celebrated the event. She lost another tooth not too long after the first one and it was a complete non issue. She was a pro at losing teeth.

And that was it for a while. Her two top teeth were a little loose but they weren’t causing any problems. I hadn’t been asked to cut her PB&Js in tiny little pieces which I was thankful for.

Daughter goes to school a block and a half from home. I chose this house because of the location to her school. I figured she could walk to school with the other kids and I wouldn’t have to do much more than shoo her out of the house. Of course it didn’t work that way in reality.

I have a vivid imagination and was convinced that every person walking a dog or simply on the street was a potential threat to my child. I know better. I know the statistics and I know that if someone ever did abduct one of my children all I would have to do is simply wait at the location they were taken from. Five minutes with either of my children would be more than any psycho killer could handle. My child would be promptly returned.

But I am also a mother who worries needlessly.

So for the last two years I have been walking my kid and the neighbor kid to and from school to make sure that any pedophile who might live in the neighborhood, or at least hangs out by the school, knows that I am on the job and that abducting my kids is not in the cards for him.

But I hate doing it.

I am not an organized person as some of you may have noticed. Both trips to and from the school take no more than five minutes each. However the trip always seems to disrupt something I am doing and I get anxious about being on time so for ten minutes before each trip is made I stand around watching the clock to make sure we leave at the absolute correct time. Which is probably why it seems like such a disruption to me.

This school year I have been trying to let the daughter be more independent. I have been walking her only to the corner where the school patrols pick her and another child up and take them the rest of the way to school. This is a half a block. Recently I started letting her and the other child, who lives next door to us, walk home from that corner. In other words I haven’t been meeting her at the corner in the afternoons.

This has been difficult for me and I still watch the clock. If she is 30 seconds late getting home I start mentally making the list of who I need to call first: 911, the neighbor, my ex husband, the President and the list goes on.

Daughter on the other hand is oblivious to all of this and simply enjoys being able to walk home on her own without her mother hovering over her.

Last Thursday I was in the laundry room when I heard my child crying half a block away. The cry of a child is in pain and who is afraid.

I ran out to the alley and saw my kid standing there bloody and alone.

It took a few minutes to calm her down enough to understand what had happened, of course I could see what had happened but since she was trying desperately to tell me through her wailing sobs I tried to listen.

She had been running, in the alley trying to keep up with the other child and tripped. She took a nose dive into the alley and her upper front tooth was gone. She was spouting blood from her missing tooth, her scraped up nose and apparently a pebble had gotten lodged into her upper lip. She looked like she had gotten beat up.

It was cold outside and in my haste to rescue my child I had not bothered to grab a coat.

We spent a good half hour looking for the missing tooth.

I don’t know about your alley ways but ours are made of tar and pebbles. The pebbles are black, gray and white.We also live in the middle of the block.

“Where did you trip?” I asked figuring I could narrow our search a little.

We searched until it became too dark to see anymore. She suggested a flashlight but I was cold and reminded her that she had been playing with all the flashlights, something I told her not to do, and all the batteries were dead. It was also beginning to snow.

We gave up on finding the tooth only when I convinced her that the tooth fairy was better equipped to find the tooth than we were.

I was willing to tell her anything to get inside so I told her the tooth fairy would find her tooth and still leave some money for her.

“How will the tooth fairy know it’s my tooth?” She asked.

“The tooth fairy has a DNA kit with her, she just matches the random teeth she finds to all the other teeth she has collected and then visits the right child.”

Once we got inside I mentioned that I wanted to clean her up a bit. She had blood all over her face and shirt. She also had blood on her knee where she had scraped it.

She wanted to see what she looked like before I cleaned her up.

“Please don’t look in the mirror” I said.

This was a mistake. Daughter started wailing again afraid that she was deformed. I shouldn’t let her watch the Today show in the morning.

Eventually I cleaned her up, put Band Aids everywhere and got her settled on the couch with an ice pack for her swollen lip and nose.

“This is the worst day of my life” she announced.

Daughter says this phrase at least three times a week. I just tell her when it’s all said and done that this will not be the worst day of her life. She has plenty of much worse things to look forward to as she gets older.

The tooth fairy visited and all is good now. She has a story to tell and some war wounds to sport for a few days until she heals.

She took a few pictures of herself. 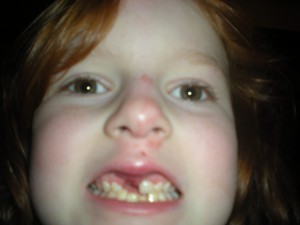 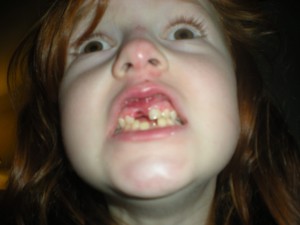 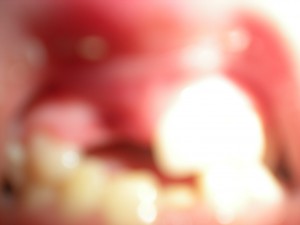 I am already saving for braces.