Recently I unfriended someone. Most of you know the story (thank you all for your support) so I won’t retell it here but I mention it because I have never unfriended anyone before. The decision to unfriend someone wasn’t made quickly.

I’m a girl so of course I want to see everything this person is saying about me, which was nothing, publicly, but you never know. I’ve been divorced twice and I’ve buried a child. Relatively speaking this wasn’t a huge loss. It certainly wasn’t like losing a brother or a mother. It was stinging and surprising but then when I think about it it wasn’t really. And that’s probably the worst thing about the loss. It reminds me of a grade school relationship — sides are drawn and suddenly everything the other person does is just wrong. It doesn’t have to be right or accurate it’s just the way the school yard rules work. 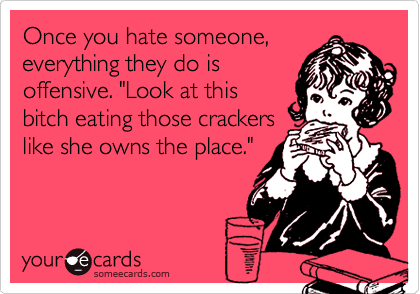 Guys won’t really get this but every woman out there does. I’m pretty sure there is a Sniglet for not unfriending someone only because you want to know what the other person is doing. Sorta like the cold war. You both want to cut ties but you don’t out of morbid curiosity.

I’m not one to hold a grudge and I usually let things roll off my back so unfriending someone seemed rather drastic to me. It also seemed impolite but that’s because I’m from Minnesota and we don’t like to rock the boat. Ever.

However, it seemed like the healthiest thing to do. I don’t care what this person does anymore. Aside from the legal wrangling that’s going on I haven’t thought of this person at all.

Except when I logged into Facebook and saw their image show up in the little box labeled ‘friends’.

So I unfriended this person using the privacy settings on Facebook and couldn’t be happier. Most people don’t take advantage of their privacy settings. Hell, some people don’t use them at all even though they should. You can not only unfriend someone but you can block everything they do from your view.

And it goes both ways.

So you don’t see when they like something and they don’t see when you do either. You can both be commenting on the same post and neither of you will know it. The only people who can see it are mutual friends and the person’s page you both commented on. This could potentially be pretty funny when you think about it.

From a programming perspective it’s a pretty remarkable thing for Facebook to be able to. On Twitter and other social media sites you simply unfollow someone and that’s the end of it. But Facebook relationships on Facebook are just as complicated as they are in real life. We are all connected one way or another and when you break down Facebook it does a pretty good job showing just how tangled up we all are. Removing a thread can’t be easy but Facebook has done a pretty good job, and much more efficiently than in real life.