It’s been a long time coming, but the end is finally here. The Star Wars story that began in 1977 has come to an end. If you’re a huge fan of the Star Wars movies you’ve probably already seen the movie, if you’re a casual fan you’ve probably got a few movies in the franchise to see before this one. Either way, there are probably spoilers in this review of Star Wars: The Rise of Skywalker.

I wasn’t going to write a review of Star Wars: The Rise of Skywalker because there’s nothing I can say about this movie that will either sway or prevent someone from seeing it. Those who love the tales of Luke, Leia, Rey, etc.. could care less if I liked the movie.

My brother, who loved the first movie in the franchise – the one from 1977 called Star Wars, just Star Wars – asked me if this movie had an acceptable ending to the saga. Was it a worthy ending? Honestly, I don’t know. Of course any story that ends could also go on. Rey and Finn and Poe will find other adventures. The question is will we get to see what they are? Knowing Disney the answer is yes, but maybe in a different format.

The thing about this movie, and all the other 8 Star Wars movies, is that there are no real surprises. Nothing, absolutely nothing, surprised me in this movie. There were no surprise twists, even though we were warned not to spoil it for everyone else.

I enjoyed the movie, it had great music – the same music from the first Star Wars so this may have been more nostalgia than anything. Come to think of it, everything I liked about this movie was due to nostalgia. Mostly because nothing new happens.

Should you stay for the credits in Star Wars: The Rise of Skywalker? Absolutely.

It’s the same damn story as the other 8 movies. There’s a war, they have to go to a cantina where we see all the creatures from Fraggle Rock, they infiltrate the bad guys ship (though like the Walking Dead, it’s getting more difficult to tell who the good guys are and who the bad guys are), there’s the ultimate moral and ethical struggle, lots of light sabering and finally defeat and the credits roll with some very familiar music. Oh, there are some ghosts from past movies too.

Or as Janna Lawrence so eloquently reviewed Star Wars: The Rise of Skywalker 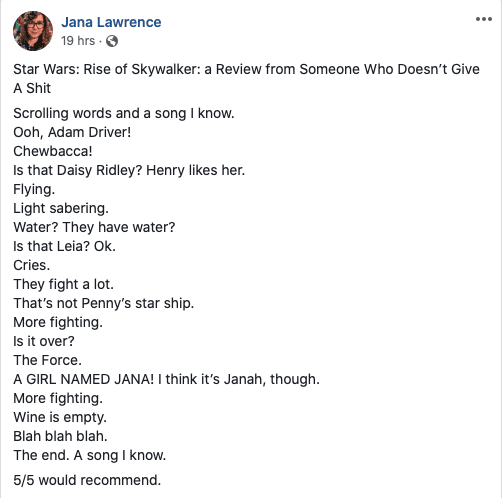