Even though I haven’t written about out trip to the Badlands yet it would have been challenging to find healthy meals on the go, at a reasonable cost, if it hadn’t been for shelf safe milk.

I am participating in a Milk Unleashed review of shelf safe milk in an effort to get the word out about how safe, convenient and tasty shelf safe milk is. I purchased my shelf safe milk at Costco but you can find it in most grocery stores these days. I’ve found it in the refrigerator even though it doesn’t need to be there.

We packed the car up with a couple of coolers but those were mostly meant for my beloved Diet Coke (yes, I am off the wagon – again) which can only be consumed ice cold. The coolers were also the place we kept the corn suckers from the Corn Palace and the shelf safe milk.

I knew I didn’t have to keep the milk in a cooler. I knew that the milk, chocolate in this case, was perfectly safe to drink at room temperature because of the way it is processed and the way it is packaged. The only problem was that I chose to take this vacation during the hottest week of the year and South Dakota has no trees. That might now sound like a big deal but for those of you who come from places with trees — it means they had no shade. Shade is a good thing, it keeps things less hot.

So I knew I didn’t have to keep the shelf safe milk in the cooler but I also knew that no one wanted to drink warm milk on the hottest day of the year.

So in the cooler (really just a large container of ice water) it went.

Let me just say this; the juice boxes didn’t fare as well as the shelf safe chocolate milk. The juice boxes were soggy and difficult to puncture with the straw. The shelf safe milk was just as sturdy as before it went into the cooler, even after hours of swimming in ice water. 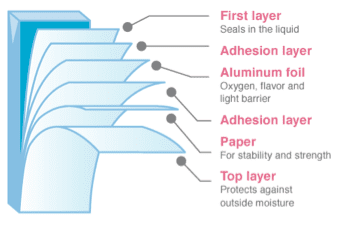 The reason for this is due to the packaging as you can see in this really cool illustration.

Before this trip I’d never tried shelf safe milk. Okay, that isn’t true, we bought some once in Mexico years ago where it’s quite common to buy milk not from the refrigeration section. It wasn’t bad and I remember thinking how convenient it would be to have milk that could be stored in the pantry instead of the fridge. Unfortunately the U.S. has been really late to the shelf safe milk party.

The milk was not only good but it was great. Now, that may have been the chocolate milk that was so good but I am pretty sure the white milk is good too.

I’ve not been much of a milk drinker since I discovered dieting in my teens. I made the mistake of replacing the milk in my diet with Tab because I thought I was saving calories. I was but not many and the cost is probably pretty high. Thankfully I replaced most of the food in my diet with cottage cheese so I was still getting calcium. Another reason I stopped drinking milk was because milk was an iffy thing. We got our milk from the milkman, like a lot of people did back then, and you never really knew how long it sat outside.

You only have to drink out of the carton once, take a huge swig of sour milk, and decide maybe there are better things to drink.

I forgot how much I actually like milk and now that I know, for sure, that it isn’t going taste all nasty sour, I can enjoy it any time.

And so can you. Below is a list of all the different shelf safe milks, some you’ve probably already tried.