Romantic as Hell – A Review

Romantic as Hell – A Review

So maybe 6 or 7 months ago Rodney Lacroix asked me to review his newest book, Romantic As Hell

. Rodney is one of my favorite authors so I was delighted to be asked. Of course if he had asked my via email or Facebook I might have responded sooner than the three months it took for me to respond through my Linkedin account where he messaged me.

Rod, or mooooooog, as many of you know him from the glory days of blogging, is one of the funniest writers out there if you like stuff written for 12 year old boys. He writes the best potty humor out there, bar none. Lately, maybe the last couple of years, he’s even worked in some really deep and heartfelt posts into his normal adolescent fare. It’s not really normal, most late 40 something men don’t talk this way. They may think it, (okay, the probably all think it) but they don’t usually share it. Whatever it is, it’s some of the funniest stuff you’ll ever read.

So, I was thrilled to be asked by Rod himself to review his latest book.

And Rod puts out a book like every six months it seems. It’s taken me nearly ten years to write one fucking book (and it’s still being edited!), but Rod can put out three in the same time it takes me to clean my garage. I’m a little jealous to say the least.

So last night I finally got to reading the book. I’d been looking forward to reading it ever since he sent it to me, but actually sitting down to read has been something I have not managed to do in a long, long time. Pretty much unless I can read while waiting at the doctor’s office I don’t read anymore. I still buy books, I just don’t read them. I want to, I really do, but there’s a lot of really good TV on these days.

Anyway, I read Romantic as Hell by Rodney Lacroix and laughed my ass off. I also got scared a few times (Rod gave me the Mobi version to read so I read it on my computer which meant I had to scroll down to read it. I scrolled down and was faced with this. 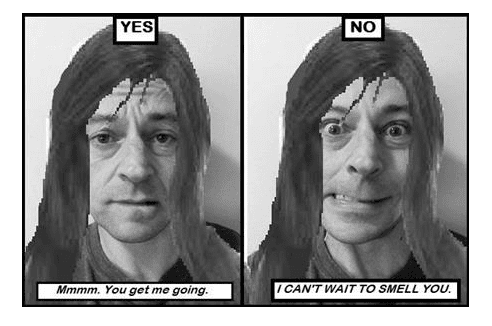 I about crapped my pants.

is a book filled with surprisingly good dating and relationship tips.

Rodney has taken his wonderfully illustrious career at striking out in the dating world and shared it with the world so that men would no longer be compelled to present their significant others with gifts that are guaranteed not to get them laid.

Seriously guys, it’s not that hard. Don’t get us things that clean the house unless it’s a guy named Sven.

If you’re a guy and are striking out in your relationships you NEED this book. There really is some sound advice hidden within the side splittingly funny stories Rod shares at his own expense. Chicks will dig you if you buy this book, read this book and actually follow its advice.

Ladies, you don’t need to buy this book because you already know this stuff, but it is insightful to read it to see how a guy’s mind actually works. Not that you’ll even consider that an excuse for any of the mistakes they make, but it’s still interesting. You won’t need to read this book but you’ll want to because it really is hilarious. Go out and get some of those new Poise pee pads before you do.

and Perhaps I’ve Said Too Much

, you’ll want to snag those too. Just make sure to get more Poise pee pads when you do.