As promised, or threatened, here is my ‘recipe’ for Chocolate Chip Cookie Waffles.

I set the waffle iron at medium heat, because I was guessing. I assumed the innards of the cookie wouldn’t cook if the iron was set at high so we went for medium heat.

Take about a handful of dough and place in a ziploc bag so you can soften it. The idea was to make it pliable enough so it would spread out on the waffle iron. The bag idea didn’t work very well as scraping it out of the bag proved to be rather messy. I should have take pictures of this part but my hands were too messy to handle the camera.

After abandoning the ziploc bag we took a plate and mushed the cookie dough on it. We spread the dough out to about an inch less than the size of the waffle iron in case it expanded. 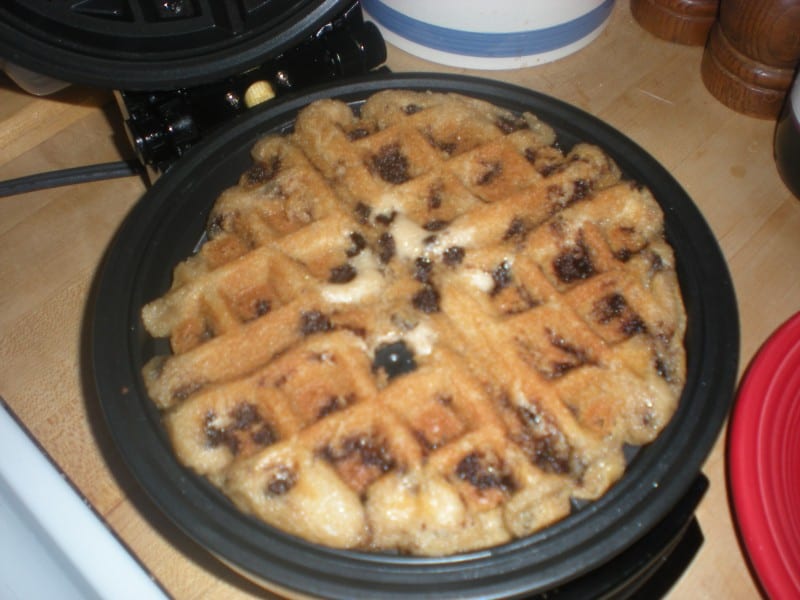 When cooking waffles the rule of thumb is that the waffles are ready when the iron stops steaming. This wasn’t the case with the chocolate chip cookie waffles as they put out a huge amount of steam. The cookie waffles smelled amazing and we kept checking them but no one had any idea if they were ready. After about five minutes of cooking time we decided they were ready.

Getting them out of the waffle iron was challenging at best. The cookie waffle was not unlike a regular cookie fresh out of the oven, it needs to cool before being removed.We couldn’t turn the iron off and wait for it to cool down because we had more cookie dough and there were at least three teenage boys waiting for the cookies. 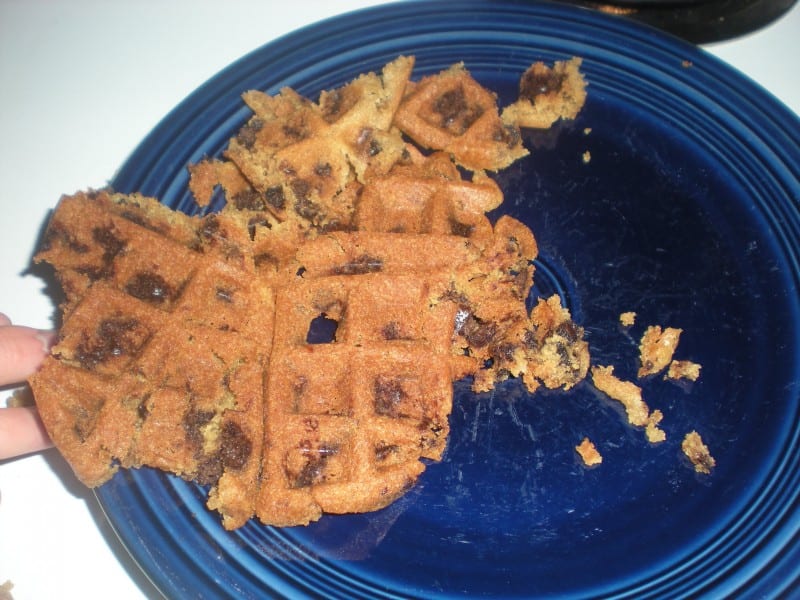 I wouldn’t recommend making Chocolate Chip Cookies in the waffle iron. We couldn’t make them fast enough for everyone and the risk of getting burned was pretty high. The cookies were very good since the outer part was crunchy and the inner part was soft. Of course that could mean it wasn’t entirely cooked but since no one got sick I am pretty sure it was okay.

Our next waffle iron experiment will be to cook scrambled eggs with bacon in the waffle iron. The idea being that if we made two regular waffles and then the scrambled egg waffle they could be layered and served kinda like an Egg McMuffin, a rather large Egg McMuffin.

Do you have any waffle iron experiments?