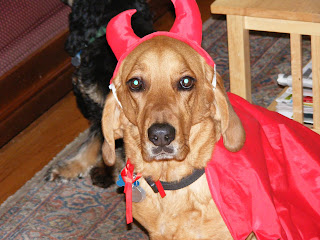 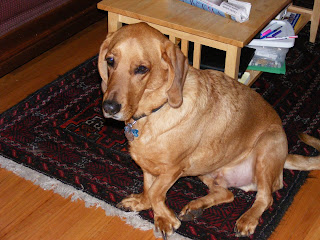 My daughter has been begging me to post about her beloved Stanley. Stanley is a Bassador which is a mix of Basset Hound and Labrador Retriever. There are actually websites devoted to this kind of dog.

Stanley, who I usually refer to as the dumb dog, came from the Humane Society. We adopted him shortly after ex #2 left taking the even dumber dog with him. I love the dumber dog and he is always welcome here but there is something slightly off about him and he is constantly spinning. Having a very large dog spinning in the house with an infant was too much and ex #2 was forced to bring him with him. Dumber dog and dumb dog get along very well for the most part. We adopted Stanley because my son, who was ten at the time, was losing not only his step dad but also his dog. He got royally shafted and my father decided to get him another dog. He brought him to the pound and there was Stanley. Stanley was the only puppy in the whole puppy wing. According to the volunteers at the humane society he was part of a litter of twelve puppies but all of them had been adopted. They knew his mom was a Basset Hound and guessed his dad was a lab.

Stanley was one of the funniest looking puppies I had ever seen. I actually tried to talk my son out of this dog because he was so odd looking. My son fell in love with him the moment he saw him and that was the end of the discussion. We brought Stanley home, he had already been named after my parents’ Basset, the one with whom my brother would bay with every time an ambulance or fire truck drove by, and carried him upstairs. Stanley kept tripping over his ears since his legs were too short and his ears were too long for a puppy.

Of course all of his care fell to me. Son was supposed to take care of things like feeding and walking the dog but we all know how that goes. While he was away at school the bassador hung out with me and daughter. Daughter was the procurer of food and the dog decided that she was the one to latch onto.

Something happened when I wasn’t really paying attention. Daughter developed a relationship with the dog that today is a wonder. She talks about him all the time. She even married him a few years ago. I actually have wedding pictures. She thinks about him morning, noon and night. She draws pictures of him all the time. She talks about him to her classmates and teachers and when she writes stories they are always about Stanley. She dresses him up in her clothes and he lets her. Often I will walk into a room with the dog dressed as a princess or fairy or what ever other character he is playing, daughter will be on some other adventure but will have forgotten to remove the costume from the dog. He just sits there and waits for someone, anyone to take the silly clothing off of him.

I once read that a way to test the intelligence of a dog is to place a cloth or towel over his head, the longer it takes for the dog to shake it off the less intelligent he is. If this is truly an intelligence test for dogs than Stanley fails miserably. He will wait until someone takes if off of him, in fact placing a towel over his head seems to immobilize him.

Stanley is a sweet dog, funny looking but sweet.