*Update – Since no one even guessed, and there is no way anyone could have guessed the outcome of the Saints vs Vikings game, we’re gonna do it again….

Just for shits and giggles I’m doing a Vikings Playoff Giveaway. If you can predict, guess or speculate the score of next Sunday’s game against the Eagles, you will win some cool Vikings memorabilia.

I’m not trying to jinx it, I won’t speculate on who I think will win, though historically this is where the Vikings start to fold, but I am hopeful. What would be more awesome than the Vikes in the Super Bowl in their own stadium? Although, I understand they would not be the home team if this happens. Anyway, it’s too exciting not to do something in honor of the great season both teams have had (but especially the Vikes!!).

I’m gonna have two winners, whoever gets closest to the score has their choice of either this cool as shit beer glass or this retro Purple People Eater t-shirt. The glass is offical NFL Merchandise, but I peeled the sticker off. If that’s a problem let me know and I’ll get one with the stick on it. The t-shirt is upcycled from Ragstock so not official NFL, but still cool as shit (not sure why it looks blue in one photo and purple in the other. It is purple). 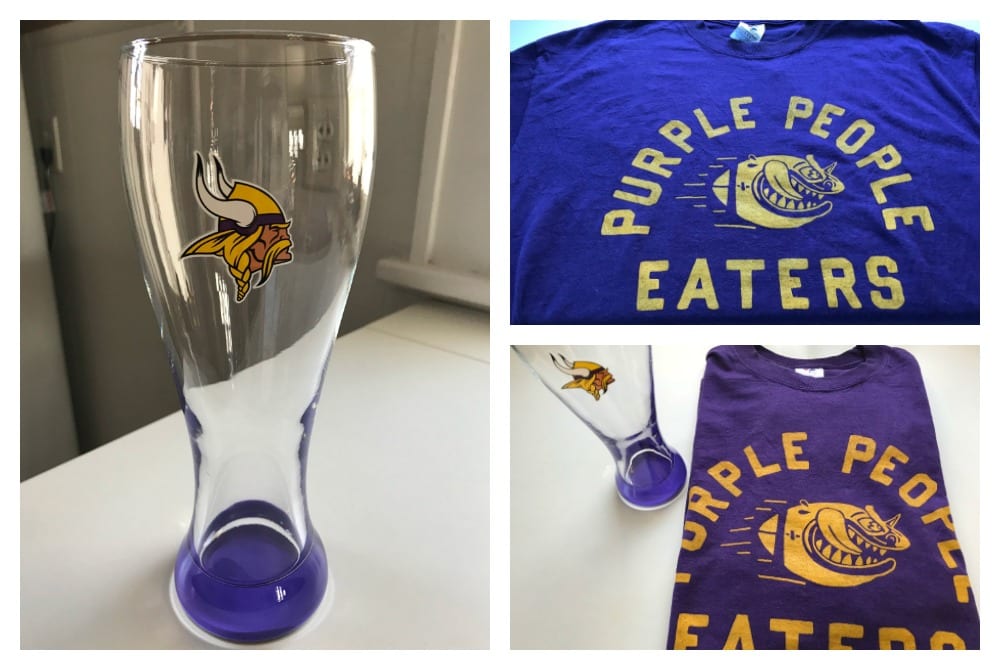 Here’s what you gotta do to win:

Sign up for my newsletter (don’t worry, I haven’t actually sent out a newsletter in years and If I do you can unsubscribe, though I think there’s an auto response when you sign up. I’m not really sure anymore….). You can fill out the form on the right sidebar over there –> –>

You can, but don’t have to, follow me on Twitter, Instagram and Pinterest (I’m not particulary active on any of those platforms but need to up my numbers so it’d be doing me a solid but that seems like a lot of work for a t-shirt or a beer glass).

Leave your prediction for the game in the comment section. The two closest guess will win and whoever is closer to the final score gets their choice of prize.