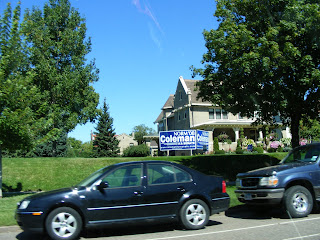 This is a house across the street from the Governor’s Mansion. Obviously Republicans since they have the largest campaign sign I have ever seen in their front yard. Norm Coleman is being challenged by Al Franken. Franken was lagging in the polls. Interestingly I passed by another property with both a sign for Coleman and Franken in it. They were right next to one another. I assume it was a duplex. Sorry I didn’t get the picture. Franken is running a pretty negative campaign and it is very off putting to most people here, at least in my neck of the woods.