This is my RAH’MN review. This is not a sponsored post, all views are mine. All my Twin City peeps, I know you’ve been seeing these ramen places popping up all over town in the last year. You’re probably wondering is it really worth $7 for 25¢ worth of ramen? I’m here to tell you – probably not.

RAH’MN opened up in Saint Paul on Snelling Avenue about a month ago. It was packed the first night – crowds in line around the corner – so I figured we’d wait a bit. We’d gone to the Mac’s take out place two doors down, which had also just opened, and were disappointed. I wanted to give the new restaurant some time to get it’s sea legs since they are close and convenient and who doesn’t like ramen?

The daughter asked if we could give it a try, so I said sure. I went to look up the menu online, to get an idea of cost (because it’s ramen, for cryin’ out loud) and was frustrated that I had to place an order to see what was offered and what things cost. RAH’MN does not have a menu on their website, although it looks like they are trying to get one up quickly. That they tout their meats are gluten free had me laughing but irritated.

The daughter is picky and she has food allergies, it’s always nice to be prepared when trying a new place. So, already I was frustrated. I asked some friends on Facebook about their experience and they said it was “solid”. I took that as a positive and headed on over.

Right away the ordering process was confusing. Or maybe that was just the way the door was positioned. No one seemed to know where the line began. The place was pretty busy and it smelled nice so I continued on. When I got to the counter I had a difficult time talking to the nice young man who was dishing up the ramen. The sneeze guard was too high, or he and I were both too short. I had to stand on my tippy toes to shout my questions at him. He responded with a smile, but I couldn’t hear a damn thing he said over the sneeze guard or the loud music and din of people talking to one another over the loud music.

It’s a build your own ramen bowl, just like at Chipotle. Chipotle is stressful, it’s not as bad as ordering coffee, but it’s up there. I have been ordering Chipotle for at least a decade now and I always get the same thing for fear of holding up the line to avoid the kind of stress I endured last night.

I had no idea what my daughter wanted, but she likes all things Asian inspired so I started building her ramen.  I threw in some tufo, some bok choi and some tomatoes – all things she likes and figured I was safe.

I wasn’t sure about the meat so I texted her a picture of the RAH’MN menu and one of all the add-ons, including 4 or 6 choices of broth. 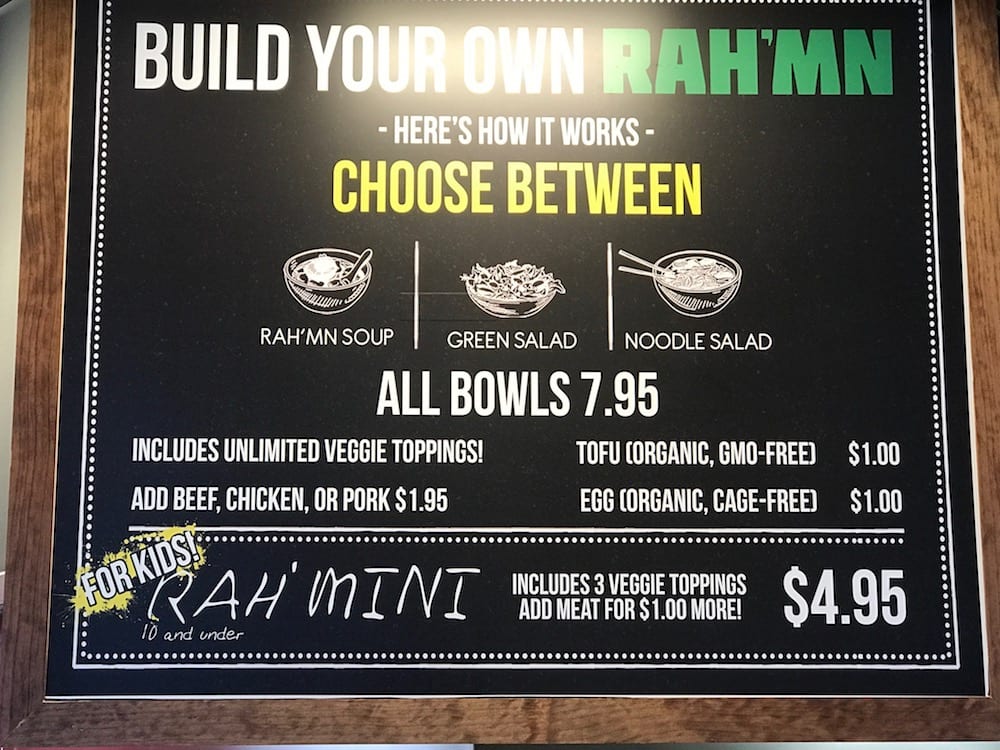 “No vegetables” was what she texted back.

Thanks, that helps, a lot.

All the while the couple next to me is pushing me to the right, even though the friendly guy behind the sneeze guard hadn’t started on my order yet. In fact, he only had one bowl going.

This caused a fair amount of anxiety because now the one he just put together for my daughter was going to become mine even though I am not supposed to eat tofu and tomatoes in ramen sounds disgusting to me. I didn’t really want pork either, which is what the kid wanted.

Lawd knows, as a Minnesotan, there was no way I was going to ask them to start over again.

I got pushed in front of the cashier and explained to him that there was another bowl that needed to be prepared – plain. Just ramen and broth.

We stood there, awkwardly waiting for the guy to produce the bowl of $7.95 ramen and then he asked if I was paying for the people next to me.

He bagged up my ramen bowls, cautioned me not to swing the bag around, and I was on my way.

I took a deep breath when I got outside and told myself I would not cry.

A few minutes later I’m home with a dripping bag of $20 worth of ramen.

When I asked what the daughter though of it, if she liked it, her response was:

Mine on the other hand wasn’t what I wanted, but if it had been something I would have ordered I am sure it would have been ok.

It was ramen, it was way too salty and the noodles were soggy. I was disappointed, mostly because of the experience, but the cost of something that is pennies to make at home also irritated me. That’s not their fault, I walked in there willingly. I guess I figured ramen could be delicious, especially starting at $7.95 per bowl.

I couldn’t finish it. The dogs like it, though I didn’t give them the broth since it was so salty.

I’d like to say we’ll give them another try, but probably not. The daughter will want to, but she’s going to have to do that on her own.

The place was clean, the staff was friendly, though not as helpful as I would have liked. The place was too loud and the food was overpriced. But other than that, it was great!