It’s almost here, the day we’ve been waiting for a couple of years now – the end of the election. But wait, before you get too excited, have you figured out how to prepare for the post election apocalypse?

As bad as it is now with wall to wall coverage of emails and p*ssies, it’s only going to get worse on Wednesday morning when we learn  that Clinton won and she’s now the President Elect who happens to be under investigation by the FBI; or we wake up Wednesday morning to learn that Trump is the President Elect (I literally just shuddered as I typed that) and pretty soon we’ll be watering our crops with Brawndo because it’s got what plants crave (electrolytes).

Or worse than both of those scenarios – we wake up on Wednesday and there is no clear winner. The 2000 election will look like a cake walk compared to the mess we’ll be in if the election is close. Get ready to hear “hanging chads”, “pregnant chads”, and all kinds of new “chads” for the next three months.

No matter how it shakes out, we could be in for a rude awakening come Wednesday morning. If you aren’t a prepper now there’s not much time to prepare for the post election apocalypse. If you haven’t stored boxes and boxes of canned goods and freeze dried food you’re going to have to loot the nearest Target and Walmart like everyone else. So be sure to dress properly. 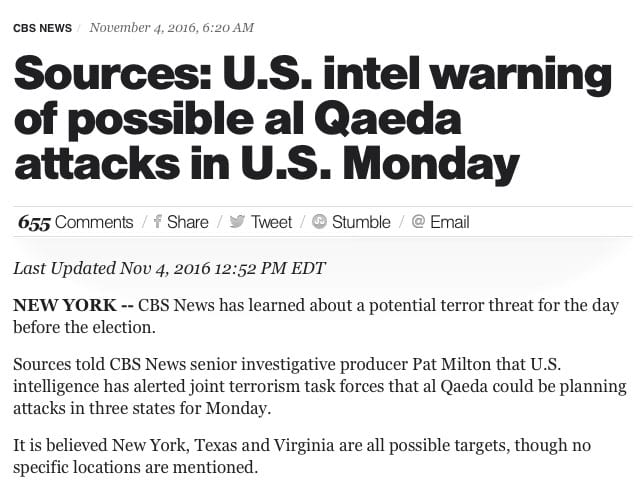 Officials are warning of a possible terror attack on US soil this Monday.

For those of you who voted early, you have nothing to worry about. For the rest of us who put it off as long as possible – take comfort in the fact that at least it won’t be your fault if the wrong candidate wins.

While it is pretty late in the game to learn how to take care of yourself and your family, there are a few things you can do to prepare for the post election apocalypse.

There are no Safe Spaces in the post election apocalypse – If you’re one of those people who needs a Safe Space, you’re probably screwed in the post election apocalypse.You may as well fix yourself into the fetal position and start rocking while sucking your thumb because people are not going to be able to keep their opinions to themselves in polite company anymore. Joseph de Maistre said – Every nation gets the government it deserves, so we have no one to blame but ourselves. It’s not about parties, or sides or left or right, we collectively made this bed and now we’re going to have to lie in it, all 318 million of us.

Get some decent boots – No matter what kind of apocalypse it’s always a good idea to have a really good pair of leather boots. If you’re vegan I don’t know what to tell you, but odds are you’re in a corner somewhere rocking back and forth so it really doesn’t matter. Boots are imperative because we’re all going to be walking through a ton of bullshit. Sandals, flip flops, Chucks or Uggs just aren’t going to cut it. While you’re at it, pick up some nice waders at Mills Fleet Farm.

Have a stash of good reading material – Recently, criminals have been emptying out Little Free Libraries and selling the books to used books stores. I’m not really sure how it’s a crime since it says free in the title of the library, but whatever. If people can sell all those second hand romance novels and knock off books of What to Expect when you’re Expecting… well, more power to them. Seems to me the books that end up in those Little Free Libraries were books that the used bookstores wouldn’t take. Anyway, hopefully you have some good reading material because when the shit hits the fan we’ll probably be under a much bigger DDS attack than we were a couple of weeks ago. This might not actually be a bad thing. After this election it might do us all some good to unplug and have a time out.

Food and Water – After Hurricane Katrina the government encouraged us to prepare for emergencies such as natural disasters, terrorism or political unrest. They created TV ads, websites, billboards and whatnot telling us how to prepare.  Sadly, most of us didn’t listen and the ones who did and actually prepared, were ridiculed. If you made fun of your neighbor for dragging cases and cases of bottled water into his basement while stocking up on months worth of beef jerky and taking lessons at the shooting range, he’s probably not going to do you a solid and share any of it with you. Ideally you should have a months worth of water and food for just this very thing. It’s probably just as well, we were over populated anyway.

Gold and Silver – For years William Devane has been telling us to buy gold in preparation for the end of the world. If you’ve followed his advice and are sitting on shitloads of gold you’re probably about to get robbed. This may be a wise investment, I don’t really know, but I can’t see society collapsing and those of us with gold or silver coins actually bartering. Odds are the things that will become valuable will be food, water, ammunition, guns and boots. Gold and silver are probably difficult things to lug around during the apocalypse.

Guns and Ammunition – If you don’t have them now you’re probably not going to find any. Walmart, Cabela’s and other sporting goods stores were the first stores looted after the liquor stores. If you need to protect yourself from those with guns you can always demand to see their license to carry permit.

But just in case it does go down that way, I’ll be over here trying on boots and eating beef jerky.