I’m Turning Into a Bad Neighbor 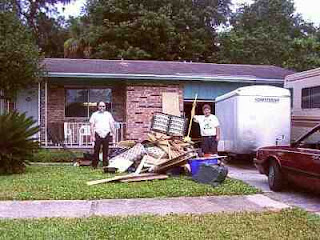 Or I might be becoming a redneck. I’m not sure.

I have (I hope) fixed everything that has gone wrong in my house in the last month. I have replaced the washing machine, dryer and dishwasher. Okay, I didn’t replace them, I hired or begged big strong men to do it, but I made the calls. The problem I have now is that all my dead appliances are in the alley behind my house next to my garage. The only thing I am missing is a couch to make the look complete.

We have these guys who roam the neighborhood alleys and pick up all the discarded metal things that people throw away. I often see them driving around in their pickup with water heaters and car parts and other unidentifiable things. I assumed they would drive through my alley and take the dead appliances. They have not.

Apparently the price of these metals has fallen considerably recently so they aren’t coming around as often as they did before. I mentioned this to a friend of mine when I took him to the airport the other day. He owns some property in Minneapolis where you are allowed to dump up to two appliances every two weeks. In St. Paul we aren’t allowed to do that without paying a hefty fee. He said he would be happy to take them to the dump when he returned. He returns in another two weeks. So my stuff is going to be sitting there for at least another two weeks.

None of my neighbors have complained yet. They are all wonderful and I couldn’t ask for better neighbors. However there is one that I know I am pissing off though I don’t know which one yet.

When my electrician installed the ceiling fan in my bedroom he installed a remote for the fan and the light. I have no wall switches in the room and a remote was the most practical way to go. The problem is that the remote is on the same frequency as one of my neighbors. I know this because my light keeps coming on when I haven’t turned it on. The fan comes on in the middle of the night as well. At first I thought it was the cat but I hid the remote and the light and fan still came on. So I am constantly turning the light and fan off with the remote. I know I can change the jumpers in the light and the remote but I don’t know how to take the light apart to get to the receiver. Yes, I have called my electrician.

I have called one of my neighbors and have asked if they have a remote controlled light or fan. They don’t. I have not called others yet since it is my plan to walk the neighborhood and see how far from the house I can go before the remote doesn’t work on my light. I just keep forgetting about it.

I suspect other neighbors will start adding to my redneck collection of broken things soon. I expect to return to my house one day to find a gutted car on cinder blocks.