I’m just a girl, I’m just making a sandwich. Isn’t that how it goes? Ugh. Lunchtime around these parts is pretty exciting if you’re of the 4 legged variety. Whatever it is that I am having is 1000% better than what is in their bowl. I know this because when I am late for lunch they will come and remind me that – Hey! It’s time to eat!!!!

For most of the summer I’ve been eating healthy. And by eating healthy I mean I’ve stopped eating carbs, at least the bad carbs and that included bread. Eating healthy, or at least healthier, is easy in the summer. Fruits and veggies are abundant and because it’s hot a chilled salad is always rather refreshing.

Unless you’re a dog or a cat in which case – blech!

But it was cold earlier this week. Colder, and not humid, so it felt downright cold even though it was probably about 70°.  Anyway, because it felt cold I wanted something a little more comforty feeling. I didn’t want to go all out and do something like soup, because that’s messy and I’ll spill on myself, but I did want something that made me feel warm inside. Even if only emotionally.

School started for the daughter several weeks ago but for most everyone else it started this week so I actually did the back to school thing and picked up some bread, even though my daughter gets the hot lunch at school. I like to be prepared. Really, I like the idea of being prepared if I took the time to actually do it. I also like the idea of being the kind of mom that packs the school lunch each day even though she won’t eat it if I do.

I picked up square cheese (what we call Kraft Singles) and some Oscar Mayer bologna (I’m totally singing the song… My bologna has a first name, it’s O S C A R….) and even some bread filled with all kinds of nuts and seeds and shit (this is why the daughter will not eat the sandwiches I make for her). It’s high in protein, low in carbs and sorta tastes like spongy cardboard. Because I was at Sam’s Club when I bought it I have two loaves of it.

As I am unpacking I am wondering why I got all this bread.

This is the actual conversation in my head:

Me: Why did I get so much bread?

Me: I don’t know, it was stupid thing to do, no one eats it.

Me: I wonder if Alex needs any bread?

Me: You should probably, at least freeze one of the loaves.

Me: Good plan, that way I can wait until it’s all freezer burnt and even I won’t eat it and I can throw it away when I need to make space in the freezer.

So, because I have so much bread, and no one will eat bread with seeds and nuts and shit all over it I decided to make a sandwich out of it.

Did I mention the daughter doesn’t like bologna either? She loves square cheese, however.

Professional Beggars (except they don’t get paid for it)

So I go about making my sandwich and before I get the mayonnaise out of the fridge I can feel the steely, half shut eyed gaze of Dini on me. Dini vomits everything she eats except for Fancy Feast classic. It sucks because Dini is a bitch and this time in the kitchen was the only time when she was nice. I’d give her a small piece of the meat and she wouldn’t glare at me for a little while. It worked out nicely. 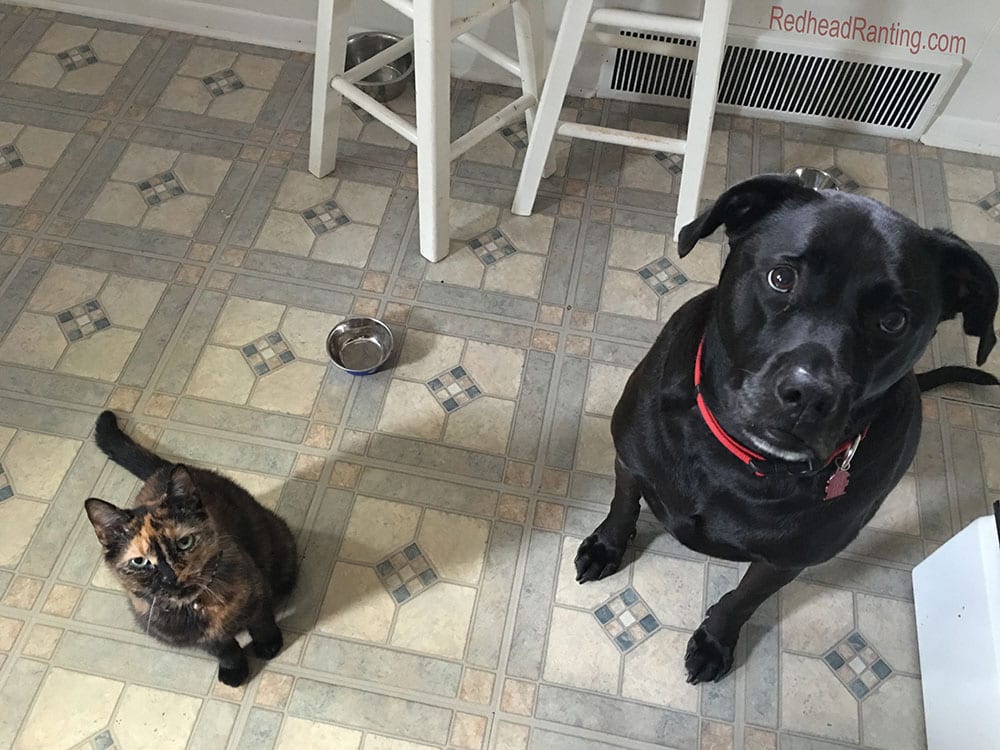 Within seconds I hear the click, click, click of Stanley and then the rush of air as Ruby bursts through the door and pushes Stanley over. All are now in my tiny little kitchen waiting for me to give them a taste of whatever it is I’m making. Even if it does have seeds and nuts and shit all over it. 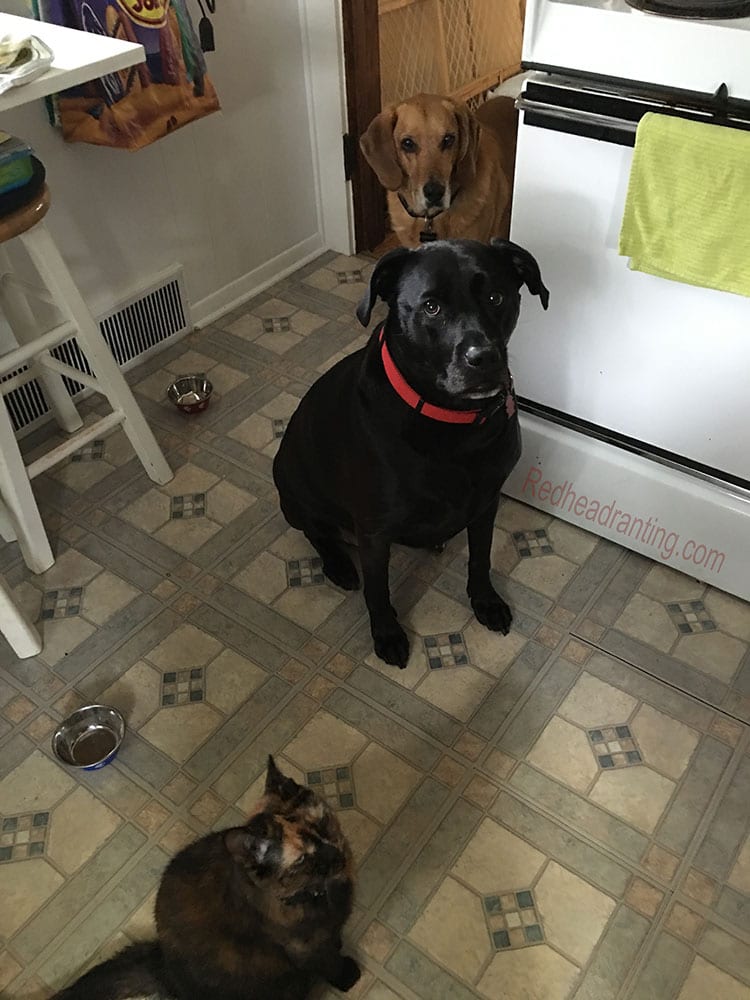 Better Things To Do

Except Zelda. Zelda doesn’t beg. I don’t know if it’s just because she hasn’t figured out begging or if she doesn’t like what I’m having. Zelda isn’t all that picky, she just likes different things. She’s all over cabbage and potato chips. She loves Ritz Crackers and those little Pepperidge Farm Goldfish Crackers, but for some reason, bologna and cheese doesn’t do it for her so she’s over by the back door staring at my shoes.

I make my sandwich, and I even give everyone – including Dini, but not Zelda – a small piece of bologna and hope Dini doesn’t vomit. The previous week had been a particularly bad week of vomiting so I don’t want to rock that boat, but so far this week she’s managed to keep everything but hairballs down. 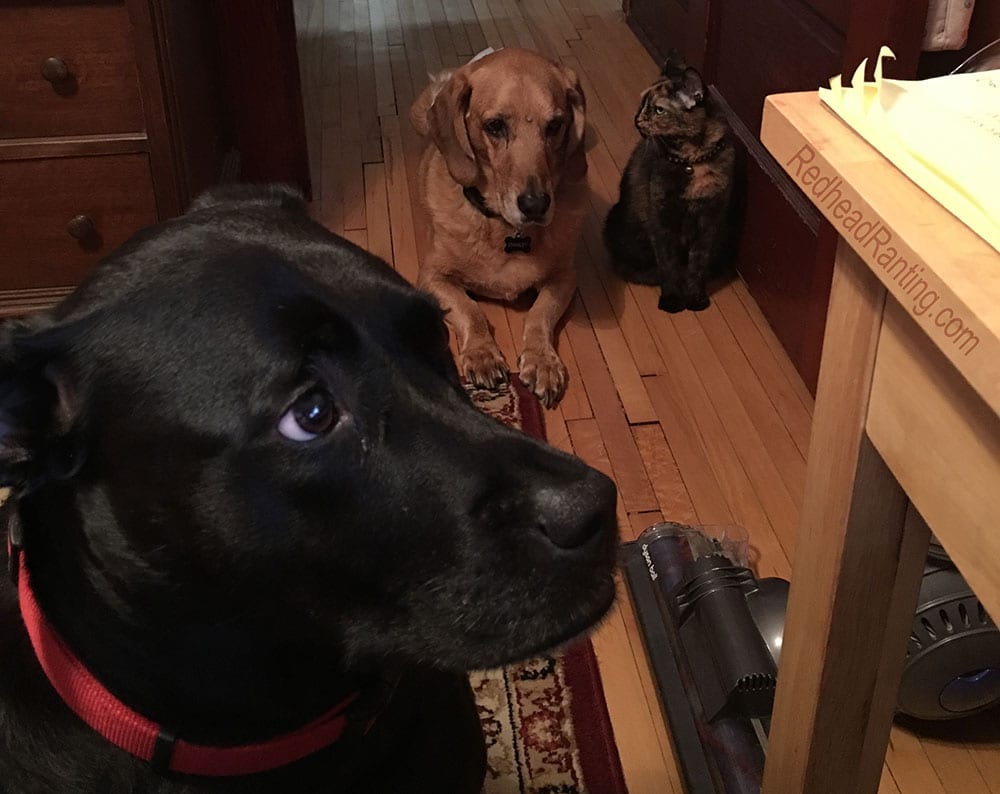 Like most Americans I eat at my desk, so I carried my plate into the office, carefully stepping over Stanley who lies down in the doorways so I don’t forget about him. They were there before I was.

Except for Zelda, she was in the other room watching her stories. 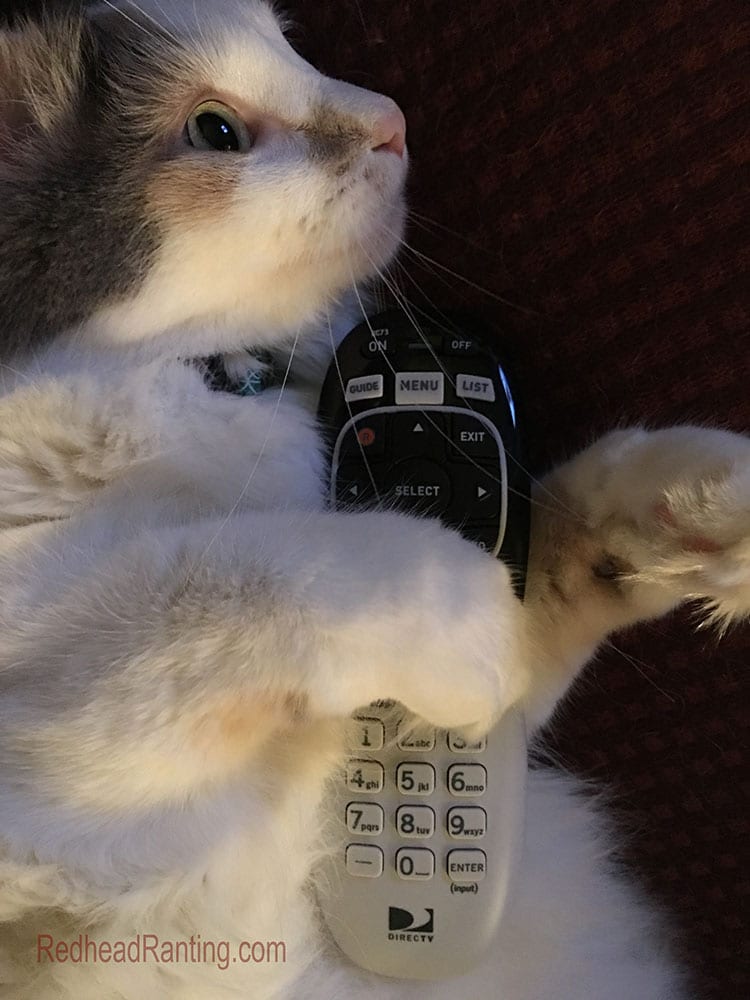 The bread wasn’t bad, it was a little chewy and I had to pick a lot of the seeds and nuts and shit out of my teeth, but considering I have two loaves to eat it’s tolerable.

Yes, I gave them all some of the sandwich and Dini didn’t puke any of it up!