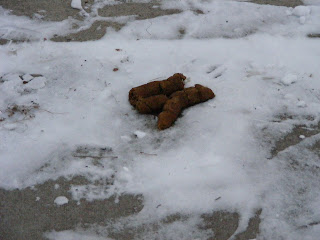 Literally. Some irresponsible lazy ass jerk let his or her dog crap on my sidewalk and then didn’t pick it up. Don’t we have laws about this sort of thing? It’s right before Christmas and someone is tempting fate. This person deserves a big stinking lump of crap in their stocking.

I’m tempted to make a sign pointing to the excrement and telling them they have to clean this up. If it was warmer out I’d sit on my porch and just wait for the bad person to stroll by with their dog and then I would go out and shame them for this misdeed. 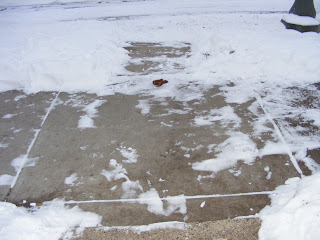 As you can see they left their gift right in the intersection of the sidewalks. The person most likely to encounter it is my paper carrier so I really have to leave a tip now. The mailman won’t be bothered by it since he doesn’t use the friggin’ sidewalk.

At least it’s cold out and its a frozen turd.

There is a special place in hell for people who don’t clean up after their animals. Karma’s a bitch!